The senator earlier filed Senate Resolution No. 137 seeking to probe the national security implications of the agreement that allows the telco company to set up equipment and facilities within the military bases of the Armed Forces of the Philippines (AFP). 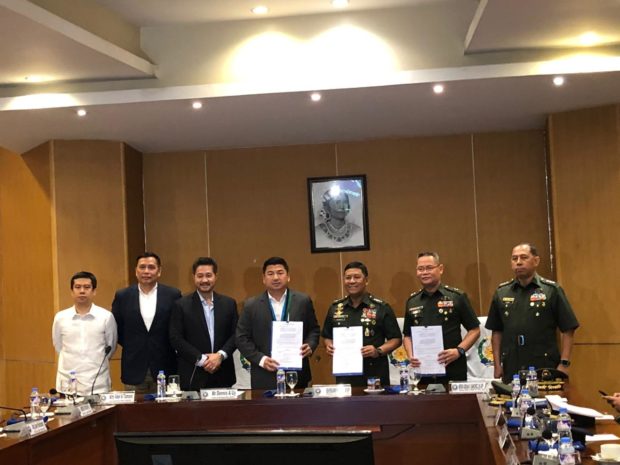 In this September 11, 2019 photo, the Armed Forces of the Philippines and Dito Telecommunity Corp. (formerly Mislatel) present their signed Memorandum of Agreement that allows the new telco to build its communications facilities in military camps and installations. (Photo by FRANCES MANGOSING / INQUIRER.net)

“Wala bang ibang cell sites? Bakit kailangan sa military bases? It’s as if the Chinese state itself is present within our military camps. Our national security is at risk here,” the senator said.

She cited the Chinese National Intelligence Law, which she noted states that Chinese corporations are obliged to support intelligence-gathering efforts.

“There is also the Chinese Counter-Espionage Law that Chinese corporations cannot refuse to assist their government in this regard,” she added.

“This is already a warning signal, and yet the AFP seems to have forgotten the warning its mother department itself raised last year,” she added.

Hontiveros noted that defense officials have previously looked into security concerns over the proximity of facilities belonging to Philippine Offshore Gaming Operators, which largely employ Chinese nationals, to military bases and installations.

Recently, Defense Secretary Delfin Lorenzana disclosed to lawmakers that he has signed a deal with Dito that would allow the company to build cell sites inside Philippine military camps.

The defense chief deferred the signing of the contract with the telco in 2019 after opposition senators asked for a copy of the agreement so they can review it.

Lorenzana had said he was given an assurance by the Armed Forces of the Philippines that the military will  “institute safeguards so that the security of our camps will be maintained.”

But lawmakers have expressed concern over the agreement.

“I am not yet ready to fully subscribe to suspicions that having them inside these national security compounds is like letting in an electronic Trojan horse. But it is better to be safe than sorry,” Senate President Pro Tempore Ralph Recto said in a statement last week.