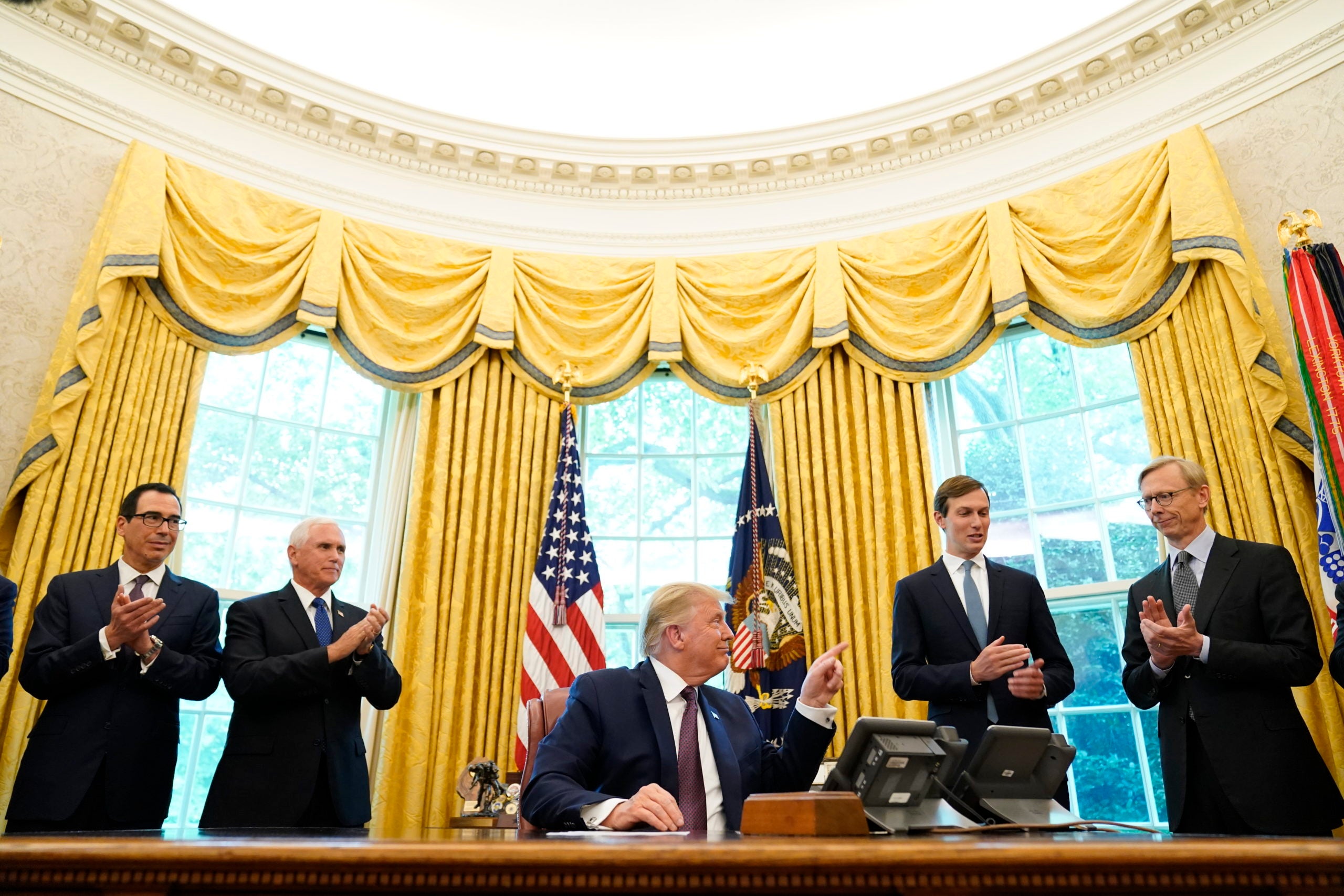 President Donald Trump speaks in the Oval Office of the White House on Friday, Sept. 11, 2020, in Washington. Bahrain has become the latest Arab nation to agree to normalize ties with Israel as part of a broader diplomatic push by Trump and his administration to fully integrate the Jewish state into the Middle East. From left, Treasury Secretary Steven Mnuchin, Vice President Mike Pence, Trump, Jared Kushner and U.S. special envoy for Iran Brian Hook. (AP Photo/Andrew Harnik)

WASHINGTON  — Bahrain on Friday agreed to normalize relations with Israel, becoming the latest Arab nation to do so as part of a broader diplomatic push by President Donald Trump and his administration to further ease the Jewish state’s relative isolation in the Middle East and find common ground with nations that share U.S. wariness of Iran.

Trump announced the agreement on the 19th anniversary of the Sept. 11, 2001, terrorist attacks following a phone call he had with Israeli Prime Minister Benjamin Netanyahu and Bahrain’s King Hamad bin Isa Al Khalifa. The three leaders also issued a brief joint statement marking the second such Arab normalization agreement with Israel in the past two months.

The announcement came less than a week before Trump hosts a White House ceremony to mark the establishment of full relations between Israel and the United Arab Emirates, something that Trump and his Middle East team brokered in August. Bahrain’s foreign minister will attend that event and sign a separate agreement with Netanyahu.

“There’s no more powerful response to the hatred that spawned 9/11 than this agreement,” Trump told reporters at the White House.

Friday’s agreement is another diplomatic win for Trump less than two months before the presidential election and an opportunity to shore up support among pro-Israel evangelical Christians. In addition to the UAE deal, Trump just last week announced agreements in principle for Kosovo to recognize Israel and for Serbia to move its embassy from Tel Aviv to Jerusalem.

But, it is a setback for Palestinian leaders, who have urged Arab nations to withhold recognition until they have secured an independent state. The Palestinians have seen a steady erosion in once-unified Arab support — one of the few cards they still held as leverage against Israel — since Trump began pursuing an unabashedly pro-Israel agenda.

“This is another stab in the back of the Palestinian cause, the Palestinian people and their rights,” said Wasel Abu Yousef, a senior Palestinian official. “It is a betrayal of Jerusalem and the Palestinians … We see absolutely no justification for this free normalization with Israel.”

In their joint statement, Trump, Netanyahu and King Hamad called the agreement “a historic breakthrough to further peace in the Middle East.”

“Opening direct dialogue and ties between these two dynamic societies and advanced economies will continue the positive transformation of the Middle East and increase stability, security, and prosperity in the region,” they said.

Like the UAE agreement, the Bahrain-Israel deal will normalize diplomatic, commercial, security and other relations between the two countries. Bahrain, along with Saudi Arabia, had already dropped a prohibition on Israeli flights using its airspace. Saudi acquiescence to the agreements has been considered key to the deals.

Trump’s son-in-law and senior adviser Jared Kushner noted that the agreement is the second Israel has reached with an Arab country in 30 days after having made peace with only two Arab nations — Egypt and Jordan — in 72 years of its independence.

“This is very fast,” Kushner told The Associated Press. “The region is responding very favorably to the UAE deal and hopefully it’s a sign that even more will come.”

Netanyahu thanked Trump. “It took us 26 years between the second peace agreement with an Arab country and the third, but only 29 days between the third and the fourth, and there will be more,” he said, referring to the 1994 peace treaty with Jordan and the more recent agreements.

Bahrain’s foreign ministry welcomed the deal and said that Hamad had praised U.S. efforts to establish security and stability in the Middle East, according to the official news agency. Sheikh Khalid bin Ahmed Al Khalifa, a prominent Bahraini adviser to the king and the former longtime foreign minister, wrote on Twitter that the agreement boosts the region’s security and prosperity.

“It sends a positive and encouraging message to the people of Israel that a just and comprehensive peace with the Palestinian people is the best path and is in the true interest of their future and the future of the people in the region,” he wrote.

In a nod to the Palestinians, the joint statement said the parties will continue efforts “to achieve a just, comprehensive, and enduring resolution to the Israeli-Palestinian conflict to enable the Palestinian people to realize their full potential.”

The agreement makes Bahrain the fourth Arab country, after Egypt, Jordan and the UAE, to have full diplomatic ties with Israel. Other Arab nations believed to be on the cusp of fully recognizing Israel include Oman and Sudan. The region’s power player, Saudi Arabia may also be close to a deal.

Like the UAE, Bahrain has never fought a war against Israel and doesn’t share a border with it. But Bahrain, like most of the Arab world, had long rejected diplomatic ties with Israel in the absence of a Palestinian peace deal. And, although the Israeli-UAE deal required Israel to halt contentious plans to annex occupied West Bank land sought by the Palestinians, the Bahrain agreement includes no such concessions.

While the UAE’s population remains small and the federation has no tradition of standing up to the country’s autocracy, Bahrain represents a far-different country.

Just off the coast of Saudi Arabia, the island of Bahrain is among the world’s smallest countries, only about 760 square kilometers (290 square miles). Bahrain’s location in the Persian Gulf long has made it a trading stop and a naval defensive position. The island is home to the U.S. Navy’s 5th Fleet and a recently built British naval base.

Bahrain is acutely aware of threats posed by Iran, an anxiety that comes from Bahrain’s majority Shiite population, despite being ruled since 1783 by the Sunni Al Khalifa family. Iran under Shah Mohammad Reza Pahlavi had pushed to take over the island after the British left, though Bahrainis in 1970 overwhelmingly supported becoming an independent nation and the U.N. Security Council unanimously backed that.

Since Iran’s 1979 Islamic Revolution, Bahrain’s rulers have blamed Iran for arming militants on the island. Iran denies the accusations. Bahrain’s Shiite majority has accused the government of treating them like second-class citizens. The Shiites joined pro-democracy activists in demanding more political freedoms in 2011, as Arab Spring protests swept across the wider Middle East. Saudi and Emirati troops ultimately helped violently put down the demonstrations.

In recent years, Bahrain has cracked down on all dissent, imprisoned activists and hampered independent reporting on the island. While the Obama administration halted the sale of F-16 fighter jets to Bahrain over human rights concerns, the Trump administration dropped that.