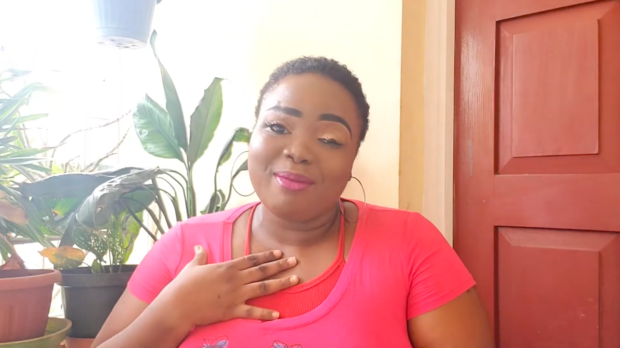 Deana-Rae Clayton was left blind in one eye and has brain damage after a car crash in 2019. Image: screengrab via YouTube/British Bionic Babe

Over a year after a car crash, a woman in Jamaica still suffers from brain damage that has left her with a British accent.

After partying in Negril on June 29, 2019, Deana-Rae Clayton, 33, she and her friends got involved in a car accident, the Sunday Gleaner reported on Sunday, Aug. 23. One of them died while two had serious injuries.

Clayton woke up from a coma two days later and had an American accent.This later on became a British accent. She had what doctors said was foreign accent syndrome, a speech disorder where a patient has an accent foreign to their native tongue.

She explained that the brain damage affected her language and motor skills. She is also left-handed and cannot speak the Jamaican accent, and at times cannot understand her own language.

Clayton is also blind in her right eye, has difficulty with physical movements and memory loss. She had to spend a month in the hospital and undergo four surgeries.

Her mother, Beverley Clayton, was her caregiver at the beginning of her recovery. She could not do anything, except feed herself, without assistance from her mom.

It took Deana-Rae about six to eight months to be able to shower and dress on her own, though she still needs help in moving around.

“They said it would take one to two years in terms of recovery to a point that I will be able to walk like nothing [happened]. However, because of COVID-19 and the delay in my left femur healing, that’s now looking like three to four years,” she lamented.

In the meantime, Deana-Rae is documenting her life post-accident on her YouTube channel “British Bionic Babe,” where she vlogs about everything from having surgery to putting on makeup with one eye.

She also keeps an optimistic outlook.

“If at any point you have your own trauma and you feel like ‘Why me?’ and ‘God is punishing me,’ He is not,” she said. “He is building you up for something better.” Niña V. Guno /ra