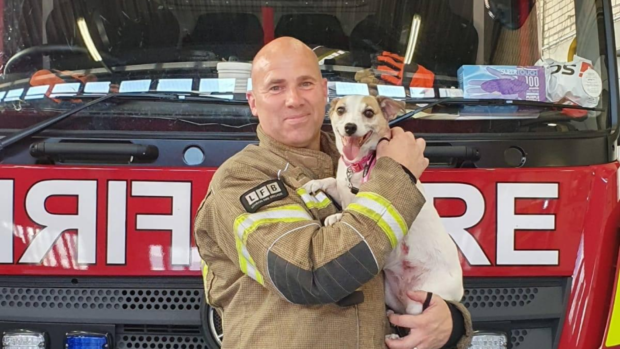 A firefighter fostered a Jack Russell terrier he rescued from an apartment unit that caught flames in London, United Kingdom.

The dog named Millie almost died after the fire broke out in her original owner’s residence on July 28, as per the London Fire Brigade’s website on Tuesday, Aug. 11.

When the fire department arrived at the unit, they were met by the woman who owned Mille. However, the owner quickly told the crew that she had left Millie behind in the burning apartment.

The crew members then entered the apartment to search for the animal while the owner was treated for smoke inhalation and taken to a hospital.

During the rescue, firefighter Jamie Trew spotted Millie under a bed. Once Trew and his colleagues safely brought the dog’s “lifeless body” outside of the unit, they attempted to reviver her.

“They gave her oxygen and used cold water to cool her body temperature and after 10 minutes she showed signs of life,” the department explained.

She was transported to a nearby emergency veterinary clinic when she regained consciousness. After receiving treatment, her original owner had agreed to let Millie be fostered and is now staying with Trew.

“It’s a lovely ending for what could have been a tragic story and if her owner decides it’s best, Millie has a forever home with Jamie and his family,” the department added.

Meanwhile, the cause of the fire is still being investigated by the fire department and the police. JB

Boy, 12, leaves puppy at shelter to protect it from abusive dad