MANILA, Philippines — A PhilHealth regional office turned into a “nightclub”?

But this was how a Senate report described one of the many “shenanigans” among errant officials of the Philippine Health Insurance Corp. (PhilHealth).

In an online interview with reporters on Tuesday, Senator Richard Gordon presented the Senate blue ribbon committee report containing the findings of its 2019 investigation into the alleged fraud and corruption within the state-run health insurer. 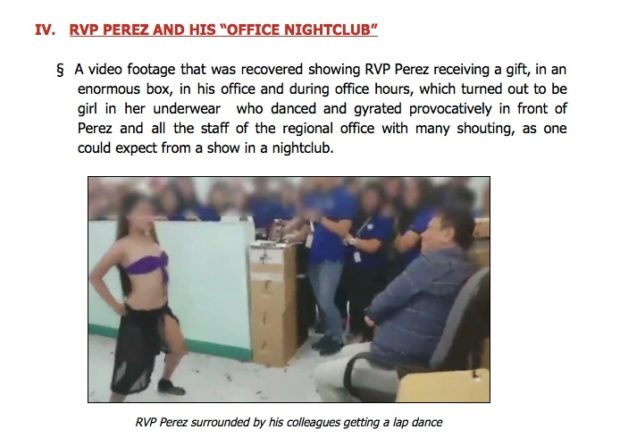 A screengrab of the report presented by Senator Richard Gordon during an online briefing on Tuesday, August 25, 2020, exhibits a screencap of a video clip showing an almost-naked woman dancing in front of a PhilHealth official.

According to the report, a PhilHealth regional vice president supposedly received a “gift” from his staff members during a surprise birthday party. And this gift was a female sexy dancer.

Gordon presented a video snip showing PhilHealth Regional Vice President for Region 4-B Paolo Johann Perez, sitting on an office chair and surrounded by his colleagues, while a scantily clad woman danced in front of him.

“On his birthday, Perez received a gift, an enormous box, in his office. A girl, dressed in nothing but her underwear, danced and gyrated provocatively in front of Perez,” the committee report read.

“Perez enjoyed the performance and was seen smiling in the video. He did not prevent the incident, or report and issue any reprimand to the employees who brought the girl,” he added.

Perez is among the members Gordon had tagged as part of the “real mafia” operating in PhilHealth.

Gordon has raised this incident during one of the Senate committee of the whole hearings on fresh corruption allegations within PhilHealth.

READ: Get the ‘rascal’s out of “Fail-Health,” Gordon says as insurer faces probes

The PhilHealth official said he was not aware that his staff would throw him a party, adding that the performer Gordon was referring to was only hired to perform a song.

“My staff prepared a program. They got a talent to sing. And it’s not true that the talent was naked. Because the crowd was noisy, she was not able to sing,” Perez said in Filipino.

“I knew nothing about it because it was my birthday. It came as a surprise to me,” he added.

Perez added that he stopped the program and told his staff to just eat.

Gordon’s committee recommended the filing of charges against Perez for allegedly violating the Expanded Anti-Trafficking in Persons Act of 2012 and the Norms of Conduct of Public Officials and Employees.