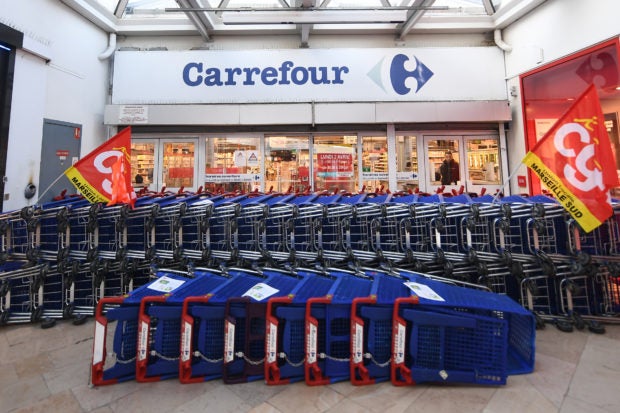 An employee of French multinational retailer Carrefour looks out of a closed supermarket in Marseille on March 31, 2018. Image: AFP/Boris Horvat

A supermarket chain in Brazil apologized Wednesday for its handling of an employee’s death at one of its stores, which covered the man’s body with boxes and umbrellas and remained open for business.

The Brazilian subsidiary of French supermarket group Carrefour said it regretted how its store in the northeastern city of Recife reacted after a sales representative it identified as Moises Santos died of a heart attack.

The employee died Friday, but the incident went viral on social media Wednesday, along with images of the man’s body lying in an aisle, cordoned off with cardboard boxes and covered up with large green parasols.

“A worker died in a Carrefour supermarket in Recife, which covered up his body to remain open. Welcome to Brazil in the year 2020,” one Twitter user wrote.

“Carrefour apologizes for the inappropriate way it handled the sad and unexpected passing,” the firm said in a statement. “The company made a mistake in not immediately closing the store after the incident.”

Carrefour said the man had received first aid and that emergency responders’ instructions were not to move the body.

“We have since changed our protocol for rare situations such as this, including a requirement to close the store,” it said.

The victim’s wife said her husband’s name was not Moises Santos, but Manoel Moises Cavalcante, and voiced anger at the situation.

“I was outraged. Apparently human beings are worth nothing. People only care about money,” she told news website G1.

Carrefour faced another scandal in Brazil in 2018, when a security guard beat a dog to death inside a store in Sao Paulo, an incident that likewise caused outcry on social media. RGA