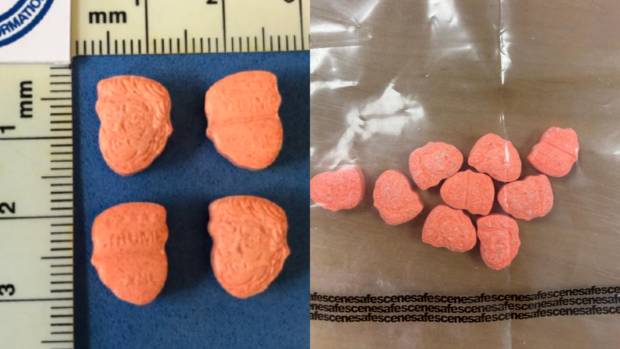 Police arrested a man after they found him carrying ecstasy pills in the shape of the face of United States President Donald Trump in Bedfordshire, United Kingdom.

Authorities spotted the tablets among other drugs owned by the man, who is in his 30s, as per the Bedfordshire Police’s Facebook post on Saturday, Aug. 15. The officers detained the man on suspicion of supplying the pills, which are also knowns as MDMA or molly.

Following the arrest, police issued a warning to the public and described the drugs as a “dangerous” batch.

“Criminals are constantly finding new ways to sell their drugs and make them more appealing,” detective sergeant Ryan Barnes said. “We have seen MDMA tablets created to look like a number of culturally popular items before and a recent example of this is the ‘Donald Trumps.’”

He added that the “Donald Trumps” contain “extremely high levels” of MDMA and seriously harm those who consume it.

“If you come across these or any other type of drug, please do not take them for your own safety, as you can never be sure what these pills contain,” Barnes advised the public.

The department also noted that someone experiencing a stimulant overdose may feel overheating, dehydration, rapid heart rate, hallucinations and seizures, among others.