PDEA seizes, burns P42-M worth of marijuana in Kalinga 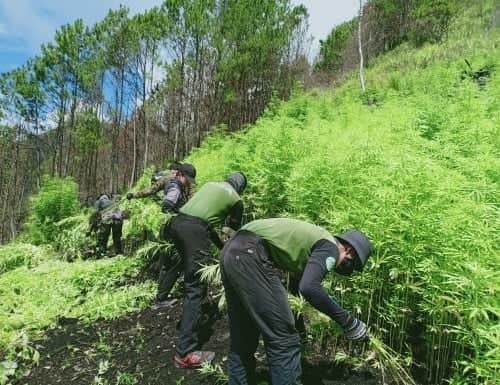 MANILA, Philippines — At least P42 million worth of marijuana plants in Tinglayan town in Kalinga have been uprooted and burned in a series of operations from Tuesday to Thursday.

According to reports from the Philippine Drug Enforcement Agency (PDEA), the illegal plants were found on two separate plantation sites in Barangay Loccong, with a total area 8,000 square meters.

The operation was led by composite teams from PDEA’s Kalinga, Mt. Province, Region I, Region II, and Mimaropa offices, along with police officers from Tinglayan Municipal Police Station and other police offices.

PDEA said that 210,00 pieces of full-grown marijuana plants were found, and were immediately burned on site.

The cultivator of the plants was not arrested, PDEA added.

This operation in Barangay Loccong is the second in the month of July, after another raid which yielded 66,000 full-grown marijuana plants estimated to be worth P13.2 million.

Then last June, P164,000 worth of marijuana plants in Sagada were also burned down by PDEA operatives.