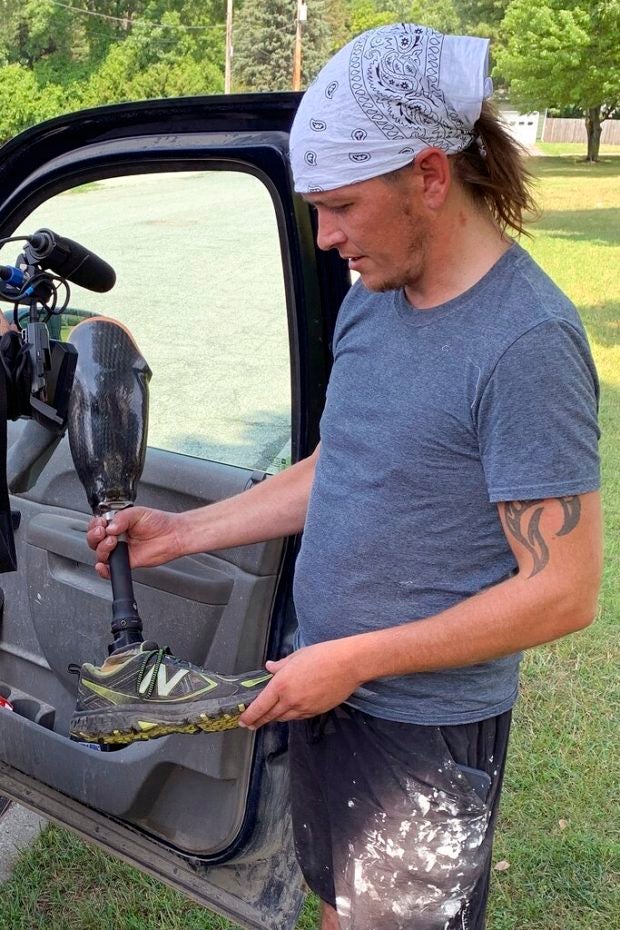 Farmer Joe Marszalkowski holds a prosthetic leg, Monday, July 27, 2020, that he found Sunday in a soybean field on his farm in West Addison, Vt. The leg was lost by double amputee Chris Marckres while skydiving on Saturday. (Jack Thurston/NECN and NBC10 Boston via AP)

WEST ADDISON, Vt. — A Vermont skydiver who lost his prosthetic leg during a jump has it back, thanks to a farmer who kept an eye out for it and spotted it in a soybean field.

Double amputee Chris Marckres, of Hyde Park, went for a jump Saturday at Vermont Skydiving Adventures in West Addison and lost one of his prosthetic legs after leaping from the plane.

“I think my adrenaline was so high and I was just so excited, I didn’t realize I had lost it,” Marckres told NECN and NBC10 Boston.

Marckres, who was harnessed to an instructor, landed safely.

He then put out the word on social media that he’d lost his leg. Farmer Joe Marszalkowski saw the post before finding the prosthetic on Sunday in a soybean field. Beyond a few scratches, it was undamaged.

“You’ve always got to keep an eye out,” said Marszalkowski, who compared the discovery to a needle in a haystack. He said he was grateful he found the leg without running it over with a machine during the fall harvest.

“Or, God forbid, the combine sucked it up — it would’ve destroyed it,” Marszalkowski said.

Marckres said losing his leg turned into a positive experience.

“We kind of take for granted sometimes how many truly good people there still are in the world,” he said.