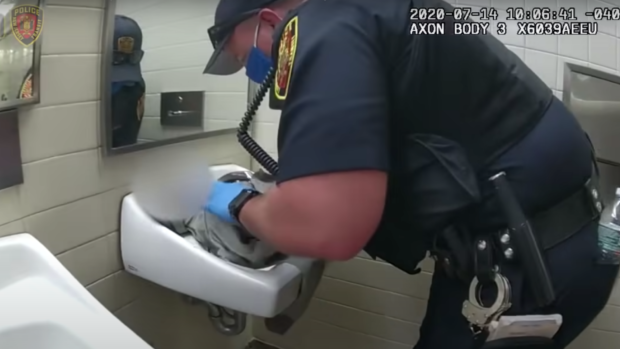 Police officers rescued a baby girl who was not breathing by administering cardiopulmonary resuscitation (CPR) shortly after she was born in a restroom in New Jersey, United States.

Authorities found the mother and her newborn in Newark Penn Station on July 14 after responding to a call, as per the New Jersey Transit Police on YouTube last Friday, July 17.

The department also posted bodycam footage from the rescue on its page. Once they arrived at the restroom, policemen found the mother in a stall cradling her newborn in her arms.

The officers immediately realized that the baby girl was not breathing and appeared to be gray. Policeman Bryan Richards then carried the baby to a sink and began performing chest compressions on her.

Seeing that the baby remained unresponsive, he immediately contacted emergency medical services for help. However, he did not wait for them to arrive and instead rushed outside of the station while cradling the child.

He was quickly assisted by his fellow officer Alberto Nunes who began driving them to a hospital. Richards continuously administered chest compressions on the baby as they made their way to the medical center while the police car’s sirens were sounding off.

As they neared the hospital, the child finally began to breathe and let out a cry while Richards continued to repeatedly press on her chest. When they arrived at the medical center, Richards immediately entered while carefully carrying the child in his arms.

Police later assured the public that the child is already “doing well” after the incident. The mother has also been tended to, as per The Record on the same day.

Following the rescue, Richards, a father of a 7-month-old child, said that the incident felt personal for him. However, he revealed that he had been prepared for similar moments since he was an emergency medical technician for the past 12 years.

Richards and Nunes are also open to staying in touch with the newborn as she grows up.