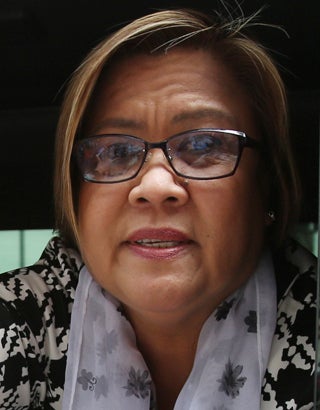 MANILA, Philippines — A senator has wondered why House Speaker Alan Peter Cayetano was irked with Vice President Leni Robredo’s comments on Congress’ inaction on the fate of health workers, when it is actually true.

According to opposition Senator Leila de Lima, the ABS-CBN franchise issue is already a glaring example of the House of Representatives’ tendency to sit over pressing concerns, as some lawmakers have been pushing for the legislative body to discuss it even weeks and months before the pandemic started.

But the ABS-CBN franchise renewal was only discussed after the National Telecommunications Commission (NTC) issued a cease and desist order against the network, after its old franchise expired last May 4.

(He would criticize VP Leni Robredo, but it’s true that they were too lax and comfortable with a lot of issues that need to be discussed.)

(Isn’t it that it took a lot of time before hearings for ABS-CBN’s franchise were conducted?  If people would not prod and criticize them, they would not work on it.)

Last Thursday, Cayetano told Robredo that the House was not sleeping on its duty, after the Vice President said in a radio program that Congress could have prioritized increasing the salaries and giving benefits to nurses, doctors, and other health workers who have been at the forefront of the fight against COVID-19.

Robredo said that instead of talking about things that do not help the government’s COVID-19 response, Congress could have discussed what aid would be given to frontliners.

In response, Cayetano enlisted several bills that the House approved for the sake of solving problems brought by COVID-19.

But for De Lima, Cayetano’s reaction fits well into his alleged role of saving face for President Rodrigo Duterte — Cayetano’s ally and his running mate during the 2016 presidential elections.

Back in 2016, Cayetano lost to Robredo, the eventual winner.

(Maybe Congress really did not sleep on its job.  The correct term: a lot of them blindly follow a lazy presidents who sleeps on the numerous problems of the country.)

The senator also asked Cayetano about the P50-million cauldron that was used for the country’s hosting of the Southeast Asian Games, which the Speaker helped organize.

(It would be a great symbol especially for these times, as to what the priority of the government is and how they are wasting public funds for senseless projects.)

The government’s COVID-19 response has drawn comparisons to the initiatives of the Office of the Vice President, as Robredo and her team were able to provide services to frontliners and other donations despite operating on a small budget.

Recently, Presidential spokesperson Harry Roque called out Robredo for being too fixated on the government’s shortcomings in terms of the fight against COVID-19, supposedly looking at the glass “half-empty.”

Robredo eventually clapped back, saying that they were filling up the administration’s half-empty glass. With reports from Jim Mendoza, trainee