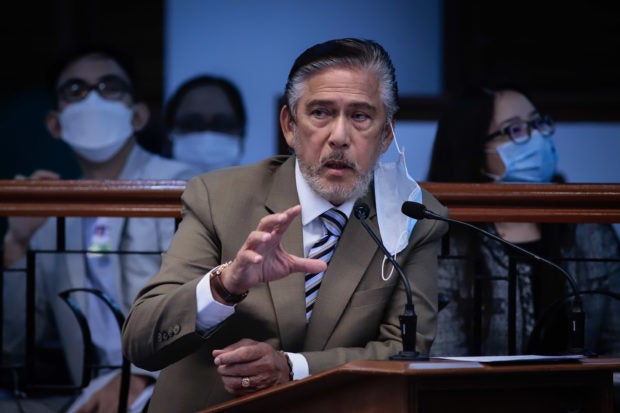 MANILA, Philippines — Senate President Vicente Sotto III on Monday raised doubts that a people’s initiative will be able to push for the granting of a fresh franchise to ABS-CBN, citing funding constraints and a possible constitutional challenge.

“I doubt if it’s possible,” Sotto said in a message to reporters when sought for a comment on the matter.

The idea to push for a people’s initiative was broached after a Social Weather Stations (SWS) survey showed that three out of four Filipinos want Congress to renew ABS-CBN’s franchise.

The survey was only a day after the House committee on legislative franchises overwhelmingly rejected the network’s bid to resume broadcast operations.

According to Sotto, private bills, like those seeking to grant legislative franchises, should “exclusively” emanate from the House of Representatives.

“A private bill is mandated by the Consti[tution] to be exclusively under the House of Reps,” he said.

“Another doubtful issue is if Comelec [Commission on Elections] has funds for it. The proponents should first check on the Consti[tution],” he added.

Nevertheless, the Senate president committed to supporting the people’s initiative to revive the franchise bid of ABS-CBN.

Under the law, signatures of 10 percent of the total registered voters nationwide, which stood at about 65 million in 2019, is needed to “exercise the power of initiative or referendum.”

The proponents of the initiative will also need to ensure that each legislative district is represented by at least 3 percent of the total registered voters.

Once signatures are collected, the Comelec needs to verify the signatures. Once verified, it will then schedule a national plebiscite.

In a message to reporters, Comelec spokesperson James Jimenez said the poll body will “refrain from issuing any statement on the matter” since it is “still largely speculative.”

He also said that while Malacañang has raised doubts on the “availability of the people initiative to enact a franchise,” the Constitution and the law “do not exclude the enactment of a franchise and does not make any distinction on the kind of law that can be enacted directly by the people through a people’s initiative.”

But the Senate leader said Malacañang could still “raise the issue to the Supreme Court to delay the people’s initiative.”

After 13 grueling marathon hearings, the House committee on legislative franchises voted 70-11 to deny the franchise bid of ABS-CBN

The network has been off the air since early May after its television and radio operations nationwide were ordered shut following the expiration of its 25-year franchise, the renewal of which was pending in Congress at the time.