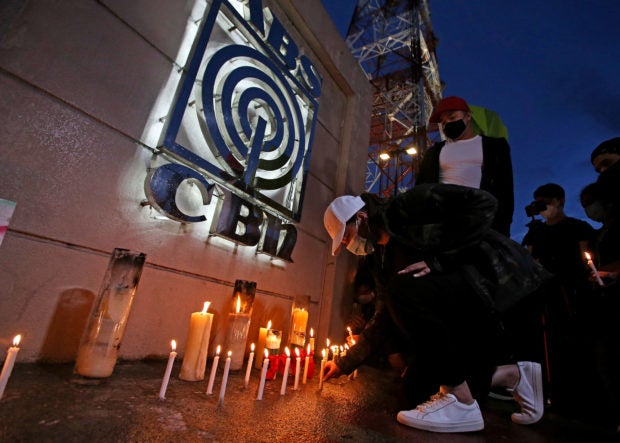 VIGIL Actress Angel Locsin, a leading talent of ABS-CBN, joins a rally outside the network’s compound held by ABS-CBN employees and other protesters. —RICHARD A. REYES

MANILA, Philippines — Supporters of ABS-CBN are pushing for a people’s initiative to allow the network to get a franchise, but an election lawyer believes it “is a very long process” that could easily fail if just one condition is not met.

A group that includes lawyers, law professors and technology experts said the constitutionally prescribed move may be the only viable option left for ABS-CBN after the House legislative franchises committee voted 70-11 on Friday to reject the network’s application for a fresh 25-year license.

“The signing of the petition alone and verification of signatures may take a year. And if it does not get 3 percent even in one legislative district only, the petition is dead,” election lawyer Romulo Macalintal said on Saturday.

The initiative, born just hours after the House committee rejected the franchise application of ABS-CBN, has started calling for volunteers.

“We’ve received great interest from volunteers and are looking forward to seeing this through. True power lies in the hands of the people, and not in a handful of politicians,” said one of the organizers, a lawyer of a senator, who asked not to be named.

Malacañang maintained that the grant of a broadcasting franchise was the exclusive prerogative of Congress, and that this could not be attained through a people’s initiative.

Presidential spokesperson Harry Roque nevertheless said the Supreme Court was the final arbiter of whether ABS-CBN could be given a franchise through a people’s initiative.

In a statement, Roque said Malacañang “will defer to the court if ever it rules on this issue in the future.”

The group pushing for a people’s initiative needs the signatures of 10 percent of the total registered voters nationwide, which in 2019 stood at about 65 million.

The proponents of the initiative will also need to ensure that each legislative district is represented by at least 3 percent of the total registered voters.

A Social Weather Stations survey found that 75 percent of Filipinos wanted ABS-CBN to be granted a franchise.

After the signature campaign, the Commission on Elections (Comelec) needs to verify the signatures. Once verified, the poll body will schedule a national plebiscite.

“The initiative succeeds when it gets a majority of the votes cast in the plebiscite,” the lawyer said.

When sought for comment, Comelec spokesperson James Jimenez said: “Right now, all this talk of using a people’s initiative petition is still largely speculative, both as to whether the parties involved will actually pursue it, and as to whether it is an appropriate course of action.”

“As a matter of sound policy, the Comelec refrains from commenting on speculative matters,’’ Jimenez added.

The organizer said his group was aware of the tedious process but believed that it was doable.

‘First in our history’

“We think that with technology available gathering signatures will be far easier. With the help of concerned and active citizens, I think we can make this a first in our history,” the lawyer said.

He said the decision of government offices to allow electronic or digital signatures in their processes amid the coronavirus pandemic was a helpful sign.

Still, signatures on physical paper would be “a major part of the strategy,” he said.

The group has taken to heart how the 1987 Constitution provides that sovereignty resides in the people. “Legislators are mere representatives of the people. Initiative is a direct exercise by the people of their sovereignty,” the lawyer said.

He also noted that a people’s initiative was one of the mechanisms to amend the Constitution.

But Macalintal said ABS-CBN had very few legal remedies at this point.

“The remedies for ABS-CBN, though long shots, are to file a motion for reconsideration before the committee on legislative franchises or appeal the decision to the plenary or the entire body of the House,” he said.

He doubted, however, that the network could muster enough votes for a motion of reconsideration or an appeal as the bill could not even hurdle the committee level.

—With reports from Tina G. Santos and Julie M. Aurelio