Palace: Duterte as healthy as other 75-year-olds 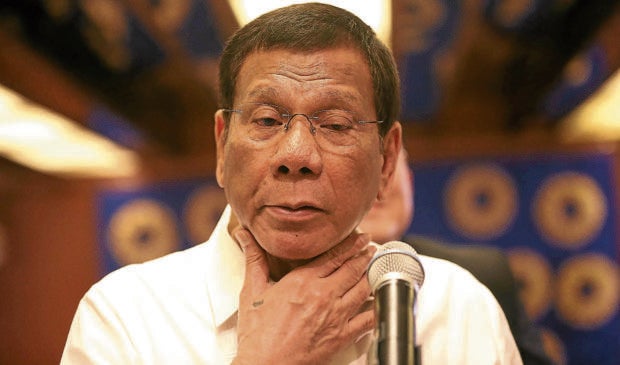 MANILA, Philippines — President Rodrigo Duterte’s physical health is at “88 percent” just like any 75-year-old but continues to dispense a usually heavy presidential workload under enhanced security measures designed as protection from the coronavirus.

“Just like any other 75-year-old, I think the President’s physical health is at 88 percent,” presidential spokesperson Harry Roque said in a radio interview.

Roque said there was no reason to be concerned about the health of the President, who has admitted suffering from Buerger’s disease, Barrett’s esophagus and myasthenia gravis in addition to the usual migraine and body pain from a motorcycle accident years ago.

The President has been in Davao City since July 3 after addressing soldiers in Zamboanga City and has only been seen in recorded public messages.

Roque conceded that the President may have appeared frail and unenergetic when he visited Zamboanga City on July 3, but that was only because he was saddened by the deaths of five soldiers who were shot by police officers in Jolo, Sulu.

On Friday, Mr. Duterte participated in the anniversary celebration of the Bureau of Jail Management and Penology via online streaming and sent a recorded message for the commissioning of the Korean-made frigate, BRP Jose Rizal.

Roque explained that the President was actually in the capital during the weekend but was scheduled to immediately return to Davao City because of a series of trips in Mindanao.The spokesperson said he could not disclose details of the President’s scheduled trips due to security restrictions, but assured journalists that he would accompany the President and brief the media from Davao City on Monday.The Presidential Security Group (PSG) has required rapid testing of and medical clearance for members of journalists and other people interacting with Mr. Duterte to avoid his exposure to COVID-19.The PSG also implements a no-touch policy on the President and requires other people to maintain a distance of six to 10 meters from him.

Last week, lawyer Dino de Leon asked the Supreme Court in April to release its resolution or decision denying his petition to compel Malacañang to release Mr. Duterte’s health records, but the high court junked the plea in May.

Read Next
Group weighing people’s initiative for ABS-CBN franchise
EDITORS' PICK
A gem of a residence in the new normal
Been there, done that but what’s the difference between MECQ and GCQ?
BREAKING: 3,226 latest COVID-19 cases bring PH’s total to 106,330
Water remains our saving grace right now
PNP: Checkpoints back in MECQ areas
Smart 5G goes live
MOST READ
MECQ guidelines in infographics
Doctors group to Duterte: ‘There was never a call for a revolt’
MECQ in NCR, other areas: Mass transportation suspended, quarantine pass required anew
Corruption during pandemic? Don’t blame it all on Duterte – Pacquiao
Don't miss out on the latest news and information.