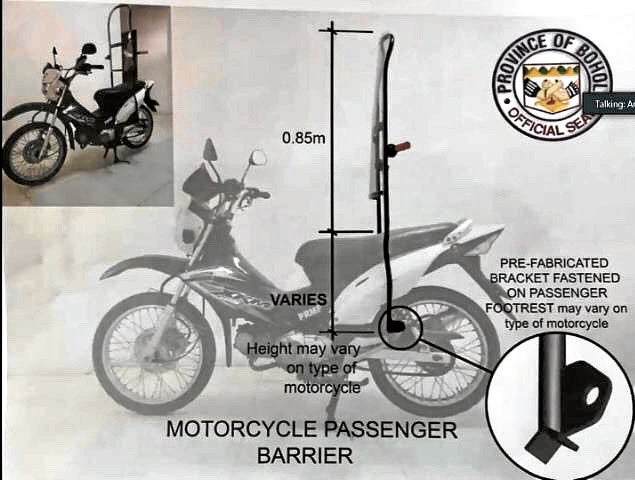 ‘FUNDAMENTALLY UNSAFE’ The makeshift barrier between driver and pillion on a motorcycle proposed by Bohol Gov. Arthur Yap is “fundamentally unsafe,” according to Sen. Bong Revilla, a motorcycle enthusiast. He says the barrier will interfere with the motorcycle’s balance, which could lead to a crash. It is also unnecessary, since the couple riding tandem live in the same house and sleep in the same bed. —PHOTO COURTESY OF THE DEPARTMENT OF THE INTERIOR AND LOCAL GOVERNMENT

Pillion riding on motorcycles is now allowed for married couples, but not for live-in partners and siblings in parts of the country under moderate coronavirus restrictions.

Interior Secretary Eduardo Año announced the relaxation of the motorcycle rule on Thursday after the Inter-Agency Task Force for the Management of Emerging Infectious Diseases approved a proposal by Bohol Gov. Arthur Yap for riding tandem on a motorcycle equipped with a plastic barrier between the driver and the pillion.

Live in the same house

Pillion is the pad behind the driver’s seat on a motorcycle. The person riding on the pillion is called pillion rider or pillion.“Starting [Friday], we will allow [pillion riding on motorcycles], but for couples only,” Año said in a statement. “The situation now is that positive [coronavirus] cases continue to rise. The couple should at least live in the same house.”

Año said the model submitted by Yap had a plastic curtain rigged on a frame higher than the pillion’s head. The frame had handles for the pillion to hold on during the ride.

Both driver and pillion should wear a helmet and protective mask, Año said.

And they should carry identification cards and their marriage certificate to show when stopped by authorities, he said.

Año said the relaxation also covered unmarried couples as long as they lived in the same house, which they could prove by having the same address.

But presidential spokesperson Harry Roque later clarified that the relief applied only to married couples.

“Not yet, because the clamor [to allow it] was initially for married couples,” Roque said when asked if live-in partners and siblings living in the same house could share a ride with the motorcycle driver.

He said authorities would ask couples to show proof of marriage, such as a photocopy of their marriage contract.

Not for ‘motorcycle taxis’

The relaxed rule applies only to private motorcycle owners, Roque said. It is not applicable to motorcycle drivers for ride-hailing companies, he said.

So-called motorcycle taxis and pillion riding have been banned since President Duterte ordered the lockdown of Luzon in March to halt the spread of the new coronavirus that causes the severe respiratory ailment COVID-19. Local governments in the Visayas and Mindanao followed with their own lockdowns to prevent the entry of people from the main island who might spread the virus in local communities.

Yap’s solution, which deals with the question of physical distancing on a motorcycle, proved satisfactory to the coronavirus response task force, but not to Sen. Bong Revilla, who warned on Thursday that the contraption was “fundamentally unsafe.”

Revilla, a motorcycle enthusiast, wrote to Carlito Galvez Jr., head of the National Task Force Against COVID-19, and Defense Secretary Delfin Lorenzana to question the requirement.

He said the makeshift barrier between driver and pillion would likely interfere with the motorcycle’s engineering and balance.

Balance is the single-most crucial aspect in designing, engineering and riding a motorcycle, Revilla said.

“When you have a [pillion], the weight has to be synchronized. As the [driver] weighs left, the [pillion] has to do the same or else there’s a high chance of crashing,” he said. “A divider between [the driver and the pillion] will make this and balance very difficult, as there will be no tactile feedback between them. That barrier will also impact aerodynamics greatly, also interfering with balance.”

The makeshift barrier could also lead to greater injuries in case of a crash, he added.

A barrier also seems unnecessary, since the couple allowed to ride tandem on a motorcycle live in the same house.

“[T]hey interact in the same space without masks, share utensils, and at the end of [the] day sleep [in] the same bed. The installation of a barrier on motorcycles for the purpose of protecting them from each other seems unnecessary,” Revilla said. —WITH REPORTS FROM JULIE M. AURELIO AND LEILA B. SALAVERRIA