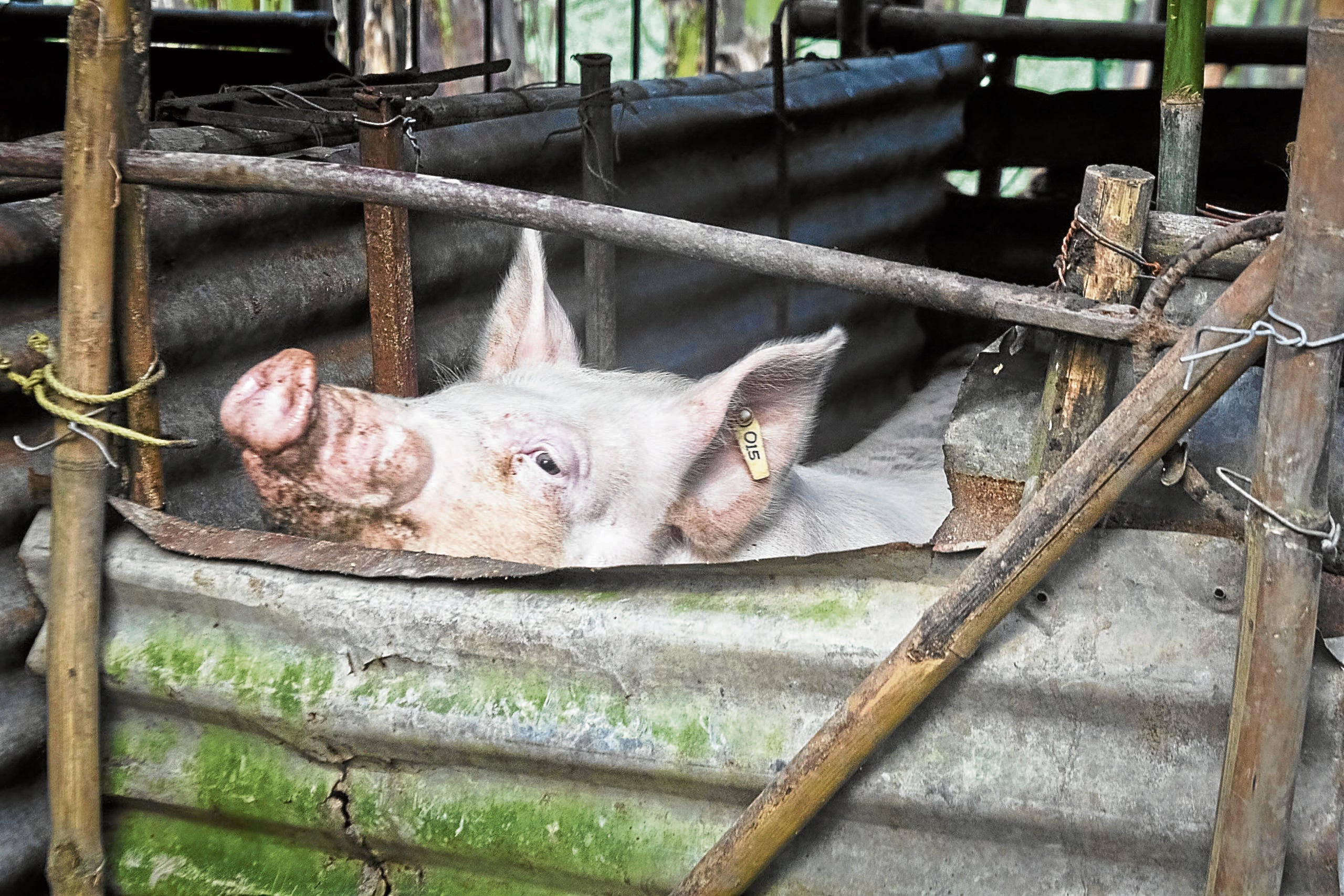 BACKYARD STOCK Fresh outbreaks of African swine fever have been reported in Laguna province, mainly on backyard farms in Calamba City and the towns of Los Baños, Victoria and Pakil. —KIMMY BARAOIDAN

The viral swine disease that has ravaged hundreds of thousands of hogs, pulling down local pork supply and raising pork prices, has infected backyard farms anew, including that of the University of the Philippines Los Baños (UPLB) that is meant for experimental or research purposes. In Laguna province, which has remained free of the African swine fever (ASF) until March, fresh outbreaks were reported on backyard farms in Calamba City and the towns of Los Baños, Victoria and Pakil, provincial veterinarian Grace Bustamante said on Thursday.

Department of Agriculture (DA) regional director Arnel de Mesa has called on traders to regularly disinfect trucks and facilities, while stricter measures are imposed against “smuggled” pork products from China, where the virus is believed to have originated.

Bustamante said “over 1,000” pigs had so far been killed to stop the spread of the swine disease, the latest in Pakil toward the end of June. Several other areas in Laguna are being monitored pending test results conducted on pigs that have shown symptoms like fever and loss of appetite.

In separate phone interviews, De Mesa and Bustamante said about “200” pigs under UPLB’s Institute of Animal Science were infected “just about two or three weeks ago.”

“There were many theories [as to how the virus found its way into the UPLB facility] but we could just say there were lapses in biosecurity,” Bustamante said. University officials have yet to respond to the Inquirer’s request for a comment.

“We think [the transmission] was through the trucks transporting [pork products],” De Mesa said. Since the early outbreaks were first reported in Quezon City, Rizal, Bulacan and Pampanga provinces in 2019, the DA official said traders had now shifted to sourcing pork supply from farms in Calabarzon (Cavite, Laguna, Batangas, Rizal and Quezon) region.

Reduced supply has forced the farm-gate price of live weight hog to shoot up from P50-P70 per kilo to P150-P185 per kilo, according to the DA and local hog raisers.

Last week, Agriculture Secretary William Dar has issued a circular increasing the suggested retail price of pork cuts kasim to P230 per kilo and liempo to P250 (from the previous P190 and P225, respectively) in Metro Manila. The DA has also reduced the previously 1-kilometer radius depopulation protocol to 500-meter radius from the infected farm. “In Laguna, we’re doing [depopulation] on a case-to-case basis. We strictly monitor farms [but no culling] unless the pigs in the surrounding farms begin to show signs of the disease,” Bustamante said.

Shortage in supply has pushed the prices of pork up as pig farm owners scaled down the number of their swine due to swine fever.

Rosendo So, chair of Samahang Industriya ng Agrikultura, said most commercial hog farms had reduced by up to 10-15 percent their usual capacity for fear that their hogs would die of the disease.

So, who operates a hog farm in Pangasinan province, said the farm owners had to cut back on the number of sows (adult female pigs) from 1,000 to 150.

“There’s really a drop in production as almost 85 percent of the sows in Pangasinan had been sold,” he said during an online forum with reporters here on Thursday.

He said a hog farm with 1,000 sows could produce and sell 1,150 heads for fattening monthly, while having 150 sows could only generate 180 heads.

“Many hog farms operators have closed down and some may declare bankruptcy,” So said.He said most hog raisers started selling their sows in January or February this year to avoid getting hit by ASF.

“If they did not sell their sows, these could have produced piglets that would have been 5 months old now and ready for the market,” So said.

He asked backyard raisers who stopped production to refrain from operating for now due to the existing threat of ASF.Infections again

According to So, some hog farms in Pampanga province resumed their operations after four months of closure only to get ASF infections again.

“There is still no assurance that the pigs are safe from the disease,” So said.

He added: “The DA’s pig dispersal program in Luzon may not be feasible. We do not advise it,” he said.

The DA compensates the backyard raisers for the pigs hit by ASF, but only pays for 20 heads for P5,000, except for piglets.

Local governments have also been giving financial aid to hog farmers depending on their capacity.

But So said local producers must look for alternative businesses while there is no vaccine yet against ASF.

“I am raising hito (catfish), sheep and rabbit now. Let’s stop raising hogs for now because it’s too risky” he said. —WITH REPORTS FROM YOLANDA SOTELO