Amid pandemic, gov’t pulls out all stops for ‘Bicol Express’ revival 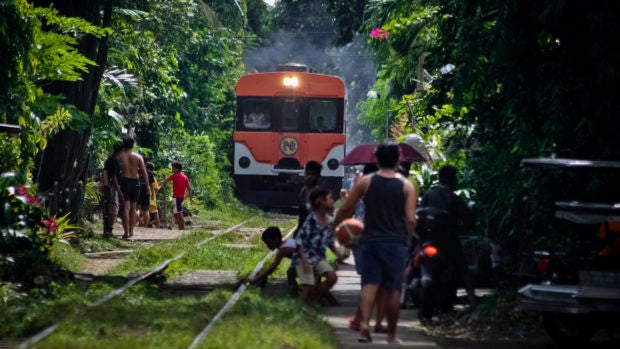 RIGHT ON TRACK A Philippine National Railways (PNR) train, in this photo taken in December last year, passes through a community in Los Baños, Laguna, as trips from Metro Manila resume. The PNR says the rehabilitation of the railway to the Bicol region is on track despite delays due to the COVID-19 crisis. —CHRIS QUINTANA

The Philippine National Railways (PNR) says it is still on track in reviving the “Bicol Express,” despite delays in the supposed reopening of the long-haul stretch down Bicol this year due to the new coronavirus disease (COVID-19) pandemic.

The government has tapped the existing train system, using six-sleeper and electric multiple-unit coaches, for special trips that recently ferried more than 300 Bicol residents marooned in Metro Manila after mass transport was suspended to stop the virus spread.

On Monday, the PNR brought home over a hundred people through the government’s “Hatid Probinsya” program.

Celeste Lauta, the PNR assistant general manager, said on Wednesday the PNR had no schedule yet for another run since the list of stranded passengers and their destinations in Bicol had to come from Malacañang’s Presidential Management Staff (PMS).

The PMS said about 13,000 people had been awaiting government-assisted rides to the provinces as of July 6.

In a separate phone interview, Joseline Geronimo, a PNR spokesperson, said those stranded, among them families with children, underwent rapid testing before they were allowed to board the coaches.

They were taken to train stations in Ragay, Libmanan, Naga City, Iriga City and Ligao City, and were picked up by local government workers from Camarines Sur and Albay provinces for another round of tests or mandatory quarantine.

Amber Mirandilla, acting director of the PMS in Bicol, said that of the total number of train passengers that arrived, 32 were found positive in rapid tests conducted upon their arrival. Nineteen of them were later confirmed to be COVID-19 positive, according to the Department of Health in Bicol.

Lauta said the PNR could only ferry as much as 150 people each run. But the trains, she said, were tapped for the program “for its high capacity, compared with buses that could only transport about 20 [people at a time due to physical distancing].”

As quarantine protocols were eased, the PNR resumed daily trips of commuter trains in June but only at 25-percent capacity within Metro Manila, Manila to Calamba City, Laguna, and Naga City to Sipocot in Camarines Sur.

In recent years, the government has been working on reviving the Luzon railway network to improve connectivity across the island. The latest station reopened was in Los Baños, Laguna, although Lauta said the train for that section was undergoing an “outfitting.”

“The [special trips] served as a barometer for us to see that the rail track up to Bicol was working and could be used,” she said, adding that the rehabilitation of tracks continued despite delays in the delivery of train parts due to supply chain disruptions. —WITH A REPORT FROM REY ANTHONY OSTRIA

Read Next
No bail for cadets in plebe’s death
EDITORS' PICK
Water remains our saving grace right now
Been there, done that but what’s the difference between MECQ and GCQ?
Smart 5G goes live
PNP: Checkpoints back in MECQ areas
A gem of a residence in the new normal
BREAKING: 3,226 latest COVID-19 cases bring PH’s total to 106,330
MOST READ
MECQ guidelines in infographics
Lacson takes up cudgels for health workers ‘threatened’ by Duterte
You’re my ‘idol’ in crafting laws, neophyte senator ‘Bato’ tells Drilon
Citing Duterte order, Lorenzana says PH won’t join other navies in South China Sea drills
Don't miss out on the latest news and information.