No bail for cadets in plebe’s death 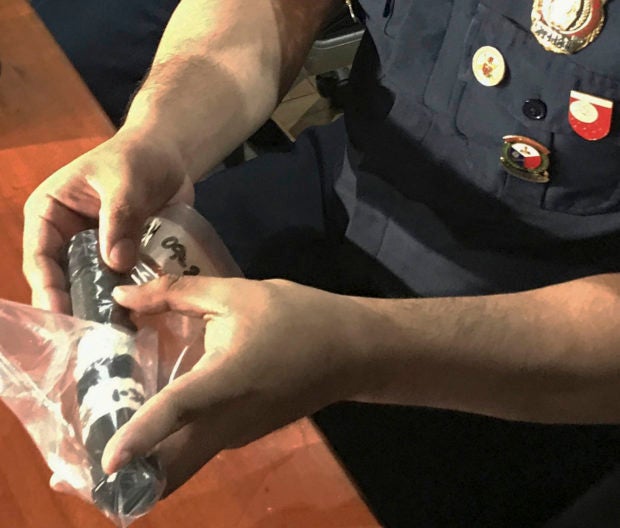 WEAPON OF ABUSE This taser, described in an affidavit as “Police 1000 kv,” was allegedly used by a senior Philippine Military Academy cadet on plebe Darwin Dormitorio when the latter was subjected to hazing and other forms of abuse last year. —VINCENT CABREZA

The cadets are undergoing court-martial proceedings for the same case.

They were also charged with murder for their alleged negligence in treating Dormitorio but each could post a P200,000 bail.

Dormitorio, 20, died in September last year from injuries attributed to a series of beatings allegedly committed by Lumbag and Imperial, who were dismissed from the academy at the end of an internal investigation.

One of the cadets reportedly admitted punching Dormitorio when PMA tactical officers first investigated reports of his maltreatment based on bruises which he suffered in August, according to a panel of Baguio prosecutors that indicted the three cadets.

Dormitorio, a plebe of PMA Class of 2023, was supposedly punished by several upperclassmen for spending half of his allowance, which was a misdemeanor under cadet rules, the prosecutors said.

Dormitorio, on Sept. 17, started vomiting profusely and was taken to the PMA Hospital. He was later discharged and ordered to recuperate at the cadet barracks.

But he was again maltreated, according to testimonies received by the prosecutors. He was found unconscious hours later and was taken back to the hospital where he died on Sept. 18.

An autopsy showed his injuries were much more severe compared with the medical findings of PMA doctors.

The PMA and the police gathered statements from Dormitorio’s classmates about the beatings he previously suffered.

“The repeated maltreatment and physical abuse suffered by Dormitorio is by no less cruel, harsh and vicious. The postmortem physical examination conducted on his body exhibited all signs of abuse,” the prosecutors said in their resolution.

They added: “He (Dormitorio) had numerous fresh and healing injuries to almost all parts of his body­—head, arms, chest, genitals and all. We make no reservations on the fact that he did suffer in all those times that his upperclassmen individually or collectively laid their hands on him.”

The police filed a complaint against seven cadets, but the panel found only Lumbag and Imperial were primarily responsible for harming Dormitorio. The others could face other charges for their role in injuring him.

The police cited an incident when the senior cadets videotaped Dormitorio “to justify their acts since they claimed that the plebe was faking his injuries and needed to be straightened [out].”

According to the prosecutors, the punishments inflicted on Dormitorio had been outlawed so the older cadets were liable for hazing. Tadena was accused of injuring Dormitorio with a taser.

The doctors have denied misdiagnosing Dormitorio, saying the plebe was treated for a urinary tract infection hours before he died. But the Baguio prosecutors said his death could have been prevented had the doctors conducted a more comprehensive examination.

But the military’s judge advocate general office would need to review the arrest warrant against the three cadets before turning them over to police custody, according to AFP spokesperson, Maj. Gen. Edgard Arevalo.

“The AFP’s judge advocate general will attend to the matter and give appropriate recommendation to the AFP chief of staff, Gen. Felimon Santos Jr., as to the disposition of the named cadets,” Arevalo said in a statement.

He said the cadets had been arraigned in February and were facing trial in a military court “for violation of Article of War 97 for conduct prejudicial to good order and military discipline.”

The proceedings had been temporarily suspended due to the coronavirus pandemic, Arevalo said.He also said the PMA judge advocate general would also take the appropriate action for the three medical officers indicted for the murder.

“We once more commit to the court that we will cooperate and, when needed, assist in the swift dispensation of justice. We owe it to the people, especially to the parents of the late Cadet Darwin Dormitorio, and the community of PMA alumni,” Arevalo said.