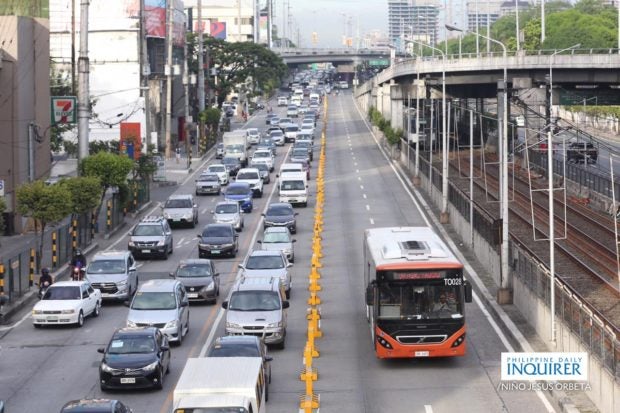 MANILA, Philippines – Commuters can expect a reduced travel time along Edsa–Metro Manila’s main thoroughfare–thanks to the Edsa busway that started its interim operation on Wednesday, the Department of Transportation (DOTr) said.

The DOTr said this project, which initially deployed 150 out of 550 authorized bus units, is expected to shorten the travel time from Monumento to Parañaque Integrated Terminal Exchange (PITx) from the previous two to three hours to 45 minutes to one hour.

This initiative intends to complement the operations of the Metro Rail Transit Line-3 (MRT-3) and its bus augmentation program.

“The interim operation of the EDSA Busway aims to help transport commuters in Metro Manila amid the general community quarantine (GCQ) still being enforced to prevent the spread of COVID-19,” the department explained.

Buses from Monumento to Quezon Avenue will use the following bus stops located on the curbside for the meantime to pick up or unload passengers:

Retaining the existing system, buses will then shift using the median lanes with the partial operability of the busway section from Quezon Avenue all the way to Estrella, DOTr said.

Upon exiting Estrella, buses will be allowed to pick-up or unload passengers at the following curbside stops from Buendia to the PITX:

The DOTr said buses will temporarily use curbside stops until the new bus stops, which include lighting fences, and canopies, are completed and concrete barriers are placed on Edsa’s median lanes.

The 36,000 concrete barriers that will be used for the Edsa busway will start its partial delivery on July 2 to 7 while placing of barriers is expected to be completed by August or September 2020.

A mini-loop will be implemented by the LTFRB from Timog Avenue to Santolan starting on Thursday.

The loop will be serviced by shuttles, which will be allowed to pick up, drop off passengers from designated curbside stops.