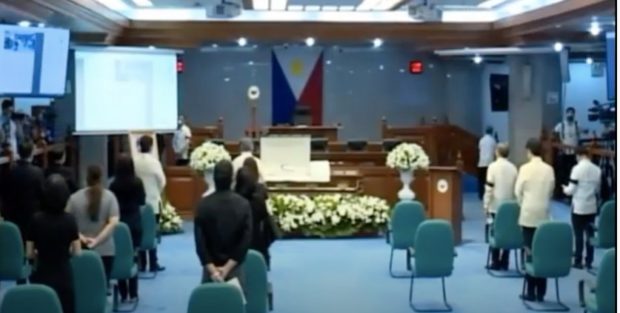 MANILA, Philippines — Senator Ramon “Bong” Revilla Jr. turned emotional as he delivered his response to the eulogies offered for his father and namesake, former Senator Ramon Revilla Sr. during a necrological service held at the Senate on Wednesday.

The younger Revilla attributed his successes to his father, whom he called his “hero daddy.”

(Thank you for everything, daddy. I would not have reached where I am now if not for you. If I will be given a chance to choose a father, I would still choose you.)

“Mahal kita daddy, mahal ka namin, You are our hero, kaming magkakapatid. You are my hero daddy. I love you,” he added.

(I love you daddy. We love you. You are our hero, my hero daddy. I love you.)

Revilla noted that his father had led a well-spent life, adding that “he worked hard with his blood, sweat and tears, not only to reach his dreams but more importantly to give the best of what light he had to give for his children.”

He recalled that his father, who died on June 26 at 93 years old due to heart failure, was not only “an actor of the highest caliber” but a “genuine artist” who wrote, produced, directed, and starred in his movies.

During his eulogy for the late senator, Sotto III also turned emotional as he recalled his deep relationship as a friend and former colleague of Revilla Sr.

“Those were the days that we will continue to remember him by and that we are glad to have known him up close and personal. It was a great honor and privilege. His memory will live on in his family of movie stars and public servants, following indeed in the footsteps of their honored patriarch,” said Sotto.

He also honored the late lawmaker’s contribution to the entertainment industry, of which Estrada was also part of before venturing out in politics.

(As an artist and producer, Ramon Sr. is one of those who gave color and joy in the Filipino film industry.)

Former President Gloria Macapagal-Arroyo, meanwhile, recalled her fond memories of Revilla when he was still in politics.

(We are saying goodbye to a great and loving father and a thoughtful friend and public servant who did not forget that the fame and love he received came from Filipinos.)

(Goodbye, Senator Ramon Revilla Sr. Until the end, our countrymen love you.)