LOOK: Black Lives Matter mural vandalized hours after it was made 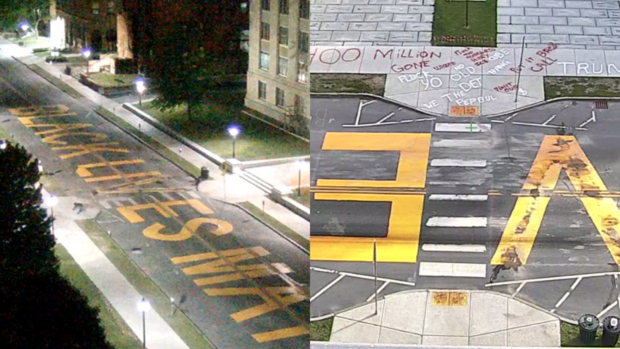 A Black Lives Matter mural was defaced just hours after it was painted on a street in Vermont, United States.

The tribute was created last Saturday, June 13. However, it was quickly vandalized in the early morning of June 14, as per Vermont house speaker Mitzi Johnson on Twitter.

“These actions reinforce the need to address head-on the racism and white supremacy right here in our communities,” she said.

Yesterday, hundreds of VTers gathered in Montpelier in solidarity to paint BLACK LIVES MATTER in front of the capitol building. Early this morning, it was vandalized. These actions reinforce the need to address head-on the racism and white supremacy right here in our communities. pic.twitter.com/M6vQiz79ol

The Montpelier Police Department later released photos of the now-vandalized mural on Facebook. Some of the messages said “$400 MILLION GONE” and “TRUMP”, among others.

While the messages “referenced government spending,” the authorities said they “did not appear to reference the ‘Black Lives Matter’ community mural project nearby.”

“Mud, dirt, and oil was placed on the roadway surface where one of the letters of the project was applied,” the police noted.

Following their statement, the department is now looking for a possible suspect. They posted a surveillance camera picture of the man “in the act and in the area of the vandalism.”

Authorities also noted that the suspect may have been downtown or near the capitol when the mural was created hours before.

Black Lives Matter is an activist movement which campaigns against violence and racism towards black people. JB