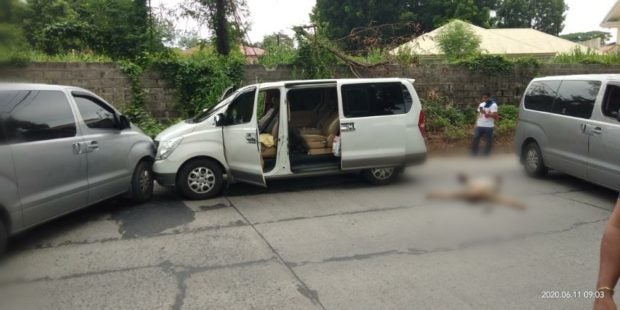 MANILA, Philippines — Two unidentified Chinese men suspected of kidnapping their countrymen were killed while a policeman was wounded in a police follow-up operation that ended in a shootout in Pampanga on Thursday morning.

The Philippine National Police-Anti-Kidnapping Group (PNP-AKG) said the two Chinese men died immediately in the shootout at Forest Park in Angeles City. Injured in the shootout was Police Captain Mike Diaz of the PNP-AKG. Diaz had a gunshot wound in his right foot and was rushed to a nearby hospital for treatment.

Retrieved from the scene were two cal. 45 pistols, an M4 carbine, and the Hyundai Starex van allegedly used in the kidnapping for ransom of three Chinese men identified as Gang Yang, Yong Long Chen and Showang Wu. The three men were kidnapped in Pasay City and were later rescued in Angeles City last June 1.

Police said that prior to the follow-up operation, two Chinese men linked to the kidnapping identified as Yang Jun and Wu Ze Han were arrested by AKG agents. The investigation later revealed that the arrested suspects have other accomplices. A follow-up operation was then hatched.

Police Major Ronaldo Lumactod Jr., PNP-AKG spokesman, said the kidnapped victims were lured by the suspects who promised them jobs as casino dealers in a Philippine offshore gaming operators (Pogo) firm. However, instead of being given jobs, the three Chinese men ended up being detained by the two suspects.

(They were hired to work for a Pogo but there was deceit. They were not given the jobs as casino dealers as promised.)

(As the victims thought they were deceived, they will resist. They will then be detained while suspects will have them ransomed by their families in China.)

In the follow-up operation, members of the PNP-AKG led by Lt. Col. Villaglor Bannawagan, and the Criminal Investigation Detection Group Angeles led by Capt. Leopoldo Cajibe Jr. and the Angeles City police tracked down the van used in the kidnapping to Forest Park in Angeles City at 9 a.m.