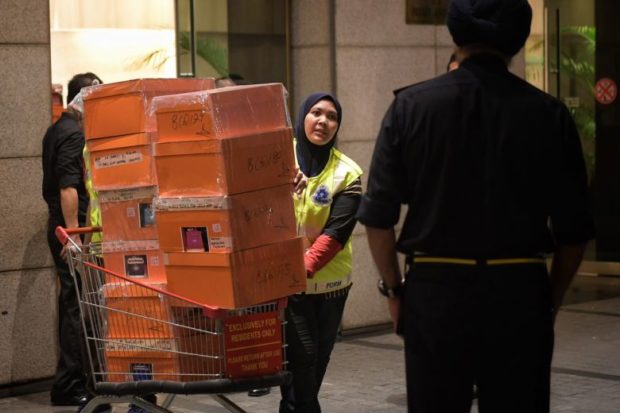 KUALA LUMPUR — Designer handbags worth millions of ringgit seized by the police during a raid related to the 1Malaysia Development Bhd (1MBD) scandal have been ruined by “magic ink” marker pens, the High Court heard.

Lawyer Tan Sri Muhammad Shafee Abdullah, who represented former Malaysia prime minister Najib Razak, told the court that the police were careless while handling the handbags despite knowing the value and had these marked directly with “magic ink”.

“There was no respect whatsoever for the items. The handbags are worth millions and that was how they treated it, ” he said on Wednesday (June 10).

The damage on the handbags was realised by Najib’s wife, Rosmah Mansor, and her lawyer during an earlier inspection at Bank Negara on Feb 22 for a separate suit.

The matter was raised by Tan Sri Shafee as he made another application to inspect the items, which were seized by the police from an apartment unit owned by Obyu Holdings after Najib’s administration lost in the 2018 general election.

The application was in relation to the government’s forfeiture suit against Obyu Holdings.

Mr Shafee also claimed that the police failed to follow procedures when they conducted the seizures.

Deputy Public Prosecutor Faten Hadni Khairuddin, however, said those were serious allegations against the police, adding that the items were kept in a vault at Bank Negara and only accessible to authorized personnel.

The prosecution objected to the application on grounds that the items involved a high value as well as concerns on security.

After hearing the submissions, High Court judge Justice Muhammad Jamil Hussin allowed Najib’s application to inspect the items in the presence of his lawyer.

Last year, the prosecution filed the application to forfeit the assets that were seized from premises belonging to Obyu Holdings Sdn Bhd and were allegedly linked to the 1MDB fund under the Anti-Money Laundering, Anti-Terrorism Financing and Proceeds of Unlawful Activities Act 2001.

Najib was the third party in the forfeiture’s application.

A major portion of the luxury items seized by the police was reported to have been from an apartment belonging to Obyu Holdings.

In addition, a piece of property in Kuala Lumpur was also seized on Nov 1, 2018.

Lawmaker to public: Help, count blessings than slam gov’t since not all hit by virus