The Department of Health (DOH) on Friday said it had compensated at least 13 health workers out of the 32 who had died fighting the new coronavirus disease (COVID-19), a day after President Duterte was reported to have been angered by the nearly three-month delay in the payments mandated by law.

The Bayanihan to Heal as One Act provides a P1-million compensation to health workers who die of COVID-19 and P100,000 to those who had fallen ill with the severe respiratory disease caused by the SARS-CoV-2 virus.

At a press briefing on Friday, Health Undersecretary Maria Rosario Vergeire said one check for P1 million was delivered to relatives of one of the 13 health workers on Thursday night.

She said P1-million checks were sent on Friday to 10 others in Metro Manila and two in the Davao Region.

“We have sent the rest of the checks to our Centers for Health Development, or our regional offices,” she said.

She did not say whether checks for those who had recovered from the disease had also been sent out.

Presidential spokesperson Harry Roque on Thursday said Mr. Duterte was “angry and frustrated” after he learned about the delay.

“The President was furious,” he said.

In his Thursday night meeting in Davao City with members of the Inter-Agency Task Force on Emerging Infectious Diseases (IATF), the President instructed Health Secretary Francisco Duque III to form a team to oversee the compensation payments.

During the meeting, which was recorded and broadcast on nationwide television on Friday morning, Mr. Duterte gave Duque 24 hours to form the team and a June 9 deadline to complete the compensation.

Duque, who promised to comply, blamed his staff for the stalled payments.

“It’s really shameful, sir,” he told the President. “The families lost their loved ones and my people are dillydallying with no sense of urgency. I really feel bad about it.”

The Filipino Nurses United (FNU) said the delayed compensation was another reason Duque should step down.

The Senate passed a resolution in April calling on Duque to resign for his alleged failure in leadership, lack of foresight and negligence as chair of the IATF, the temporary state agency tasked with leading the administration’s response to the pandemic.

FNU president Maristela Abenojar said no one expected Duque to be the one to craft the implemention guidelines for the compensation. The DOH cited the lack of guidelines as a reason for the delay.

But as the head of the DOH, it was Duque’s responsibility to check whether it was being done, she said.

“If he was just waiting for a report, he is an inefficient head because he is not on top of their priorities,” Abenojar said.

Given how easy it was for Duque to pin the blame on his subordinates showed that he was no longer fit for the job, said Akbayan Youth chair Dr. RJ Naguit.

“In a state of pandemic, we need a leader who can take charge and assume responsibility. We need people who can inspire and keep the morale going. With these statements made by the secretary, how else can he lead the workers of the DOH?” Naguit said.

Health reform advocate Dr. Minguita Padilla said not taking responsibility for failures of an office “doesn’t say anything good about [its] leadership.” 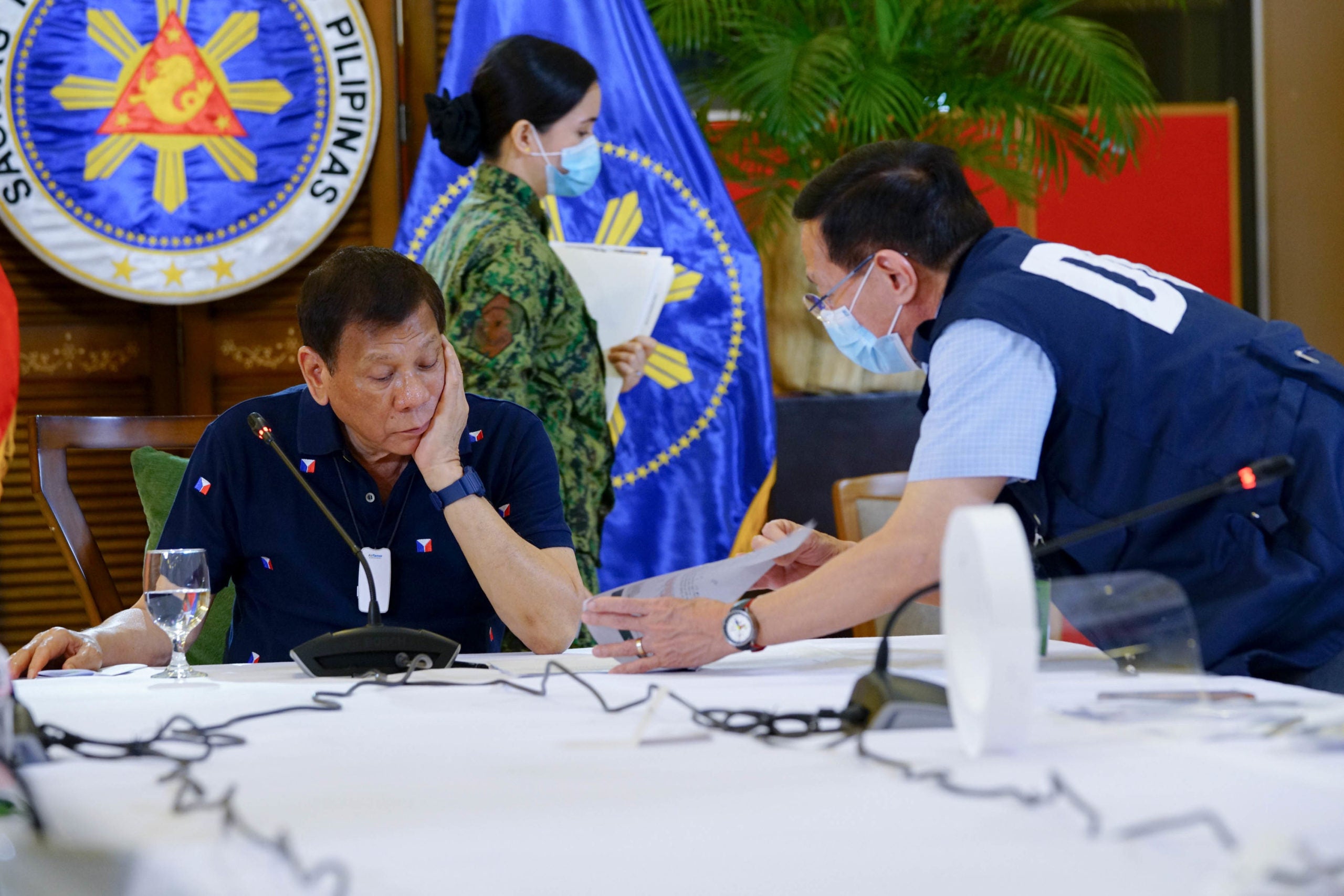 “A good leader should be able to say ‘the buck stops here.’” she said. “I don’t want to add to the burden of the DOH and to its hardworking and often maligned men and women. It pains me to hear yet again that they are being thrown under the bus.”

But several hours after his televised rebuke of his staff, Duque owned up to the delayed compensation.

“While I expressed disappointment toward some members of my team, I acknowledge that this is still my responsibility as SOH (secretary of health),” Duque said on Twitter.

“I will make sure that we comply with the Bayanihan to Heal as One Act, with proper documentation and identification of HCWs (health-care workers),” he added.

The President said Duque should not “run his own errands” and that the government was “wasting money paying for these idiots” who fail to carry out their tasks.

“When I give an order for something to be done, I don’t count months. I only count days. It’s teamwork,” he said.

“Can you imagine, two months? And the secretary is beaten up every day because he was unable to do anything. Who should Duque order to do this? It should be the DOH, not the Bureau of Fire Protection,” Mr. Duterte said.

The President noted that Congress, to whom he reports weekly about the COVID-19 situation, had not called his attention about the delayed compensation sooner.

“You should have seen it in the report that there’s no assistance to the dead extended yet, the P1 million for the dead doctors never came,” he said.

Senators were the first to point to the delayed compensation during a hearing on the economic recovery plans of the government on Tuesday.

On Friday, several of them were bewildered that despite his alleged shortcomings, Duque still had the President on his side.

“I’m happy [that] the President has pushed everyone to act on it because the bottomline here is we give more than lip service to our heroic health workers,” Sen. Sonny Angara said in a Viber message to the Inquirer.

“As for Duque, it seems [that] he has been elevated to beatific levels already despite his numerous missteps,” he said. “In other words, let’s make Duque ‘St. Francis’ since he has no sin. He who is without sin.”

Sen. Panfilo Lacson said it was already “kind of boring to see Duque” passing the blame to his underlings.

“What gives? Many of us are starting to wonder what ‘amulet’ Duque has to deserve such a special treatment” from the President, Lacson said.

He said the DOH should immediately give 70 percent of the amount due to the families and release the balance after the required documents had been submitted.

“The loved ones of our heroes who died fighting COVID-19 will have a hard time compiling the documents they must submit before the cash aid is released to them,” Recto said.