US will allow limited flights by Chinese airlines, not a ban | Inquirer News

US will allow limited flights by Chinese airlines, not a ban 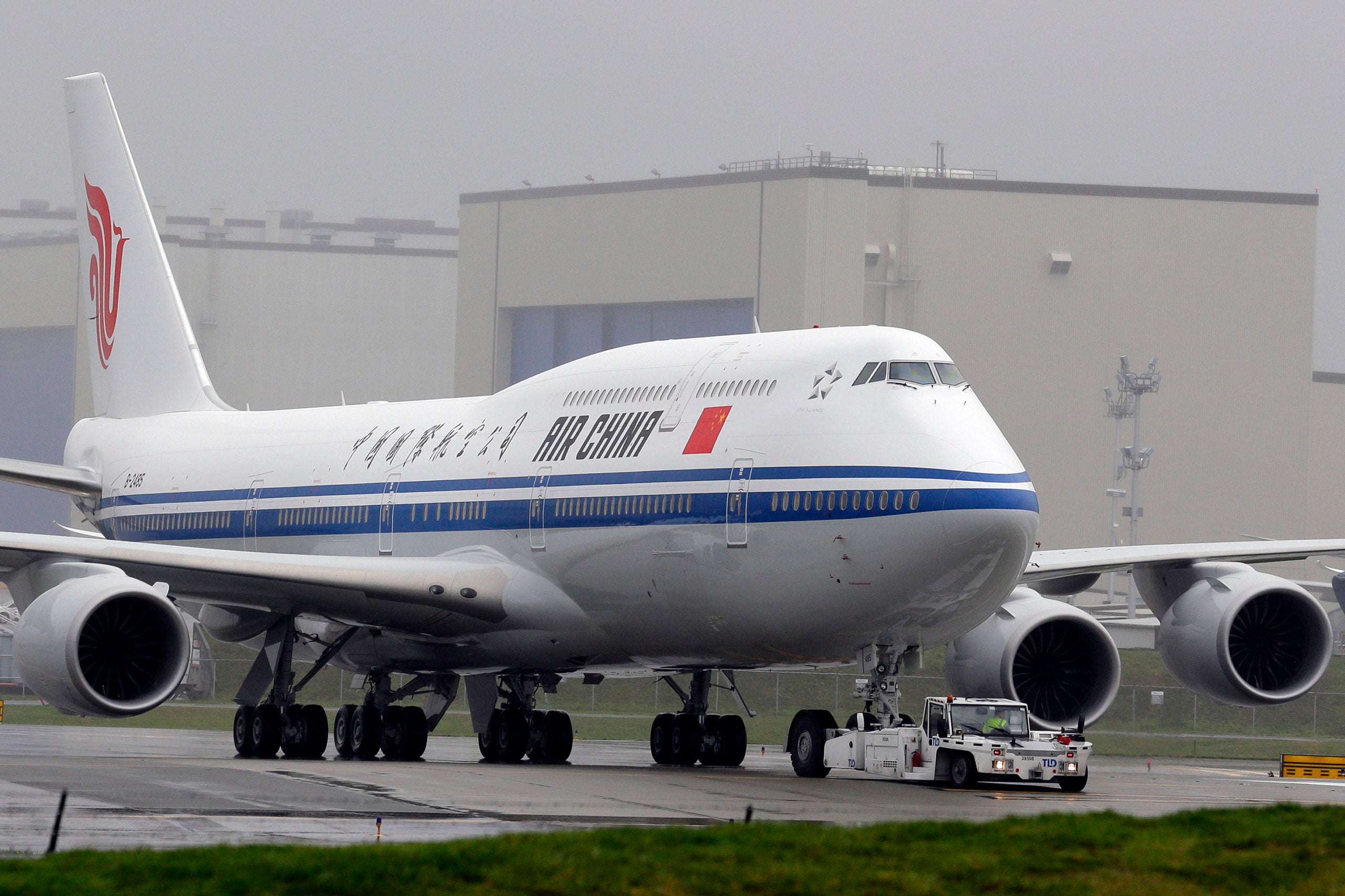 FILE – In this Sept. 29, 2014, file photo, the first Boeing 747-8 Intercontinental airplane to be delivered to Air China is moved into position from Boeing’s assembly facility to Paine Field in Everett, Wash. The Trump administration said Friday, June 5, 2020, it will let Chinese airlines operate a limited number of flights to the U.S., backing down from a threat to ban the flights. The decision came one day after China appeared to open the door to U.S. carriers United Airlines and Delta Air Lines resuming one flight per week each into the country. (AP Photo/Ted S. Warren, File)

The Trump administration said Friday it will let Chinese airlines operate a limited number of flights to the U.S., backing down from a threat to ban the flights.

The decision came one day after China appeared to open the door to U.S. carriers  United Airlines and Delta Air Lines resuming one flight per week each into the country.

The Transportation Department said it will let Chinese passenger airlines fly a combined total of two round-trip flights per week between the U.S. and China, which it said would equal the number of flights that China’s aviation authority will allow for U.S. carriers.

Delta praised the U.S. government for trying to “ensure fairness and access to China.” United said it was reviewing the matter. Neither said whether the latest development in the dispute between the two countries would affect their plans. Both had hoped to offer more flights.

The Transportation Department said it might further ease restrictions if China does the same. Officials are concerned, however, about conditions China is imposing that could affect whether

U.S. airlines resume their flights. Those requirements include taking temperatures of all passengers in mid-flight and suspending an airline’s future flights if five or more passengers test positive for the coronavirus after arriving in China.

China’s embassy in Washington did not respond to messages seeking comment.

The dispute between Washington and Beijing over airline service has been building for weeks and is part of broader trade and diplomatic tension between the world’s two biggest economies.

In early January, there were more than 300 flights per week between the two countries, but international carriers reduced and then stopped flying to China as the coronavirus pandemic devastated demand for air travel. United, Delta, and American Airlines suspended flights to China before mid-March.

Chinese airlines reduced but didn’t eliminate their flights to the U.S. They ran about 20 flights per week on February, 34 by mid-March. Air China, China Eastern Airlines, China Southern Airlines, and Xiamen Airlines continue flying those routes.

Travel in both China and the U.S. has partly recovered in the past two months, although it remains far below 2019 levels. In May, Chicago-based United and Atlanta-based Delta petitioned China to resume flights there, but received no response.

The Trump administration protested that China’s refusal to grant access to U.S. airlines was unfair. The Transportation Department announced Wednesday that it would prohibit all passenger airline flights from China no later than June 16.

On Thursday, the Civil Aviation Administration of China said it would let more foreign airlines fly to China starting next week as anti-coronavirus controls are eased.

The order did not identify airlines, but it appeared to limit United and Delta to one flight per week because they stopped flying to China before mid-March. American, which is based in Fort Worth, Texas, does not plan to return to China before October.

The air-service spat escalated against a backdrop of a long-running trade dispute between the U.S. and China. Washington has also criticized China’s handling of the coronavirus outbreak and treatment of Hong Kong. Chinese officials fired back this week by highlighting civil unrest and racial discrimination in the U.S.