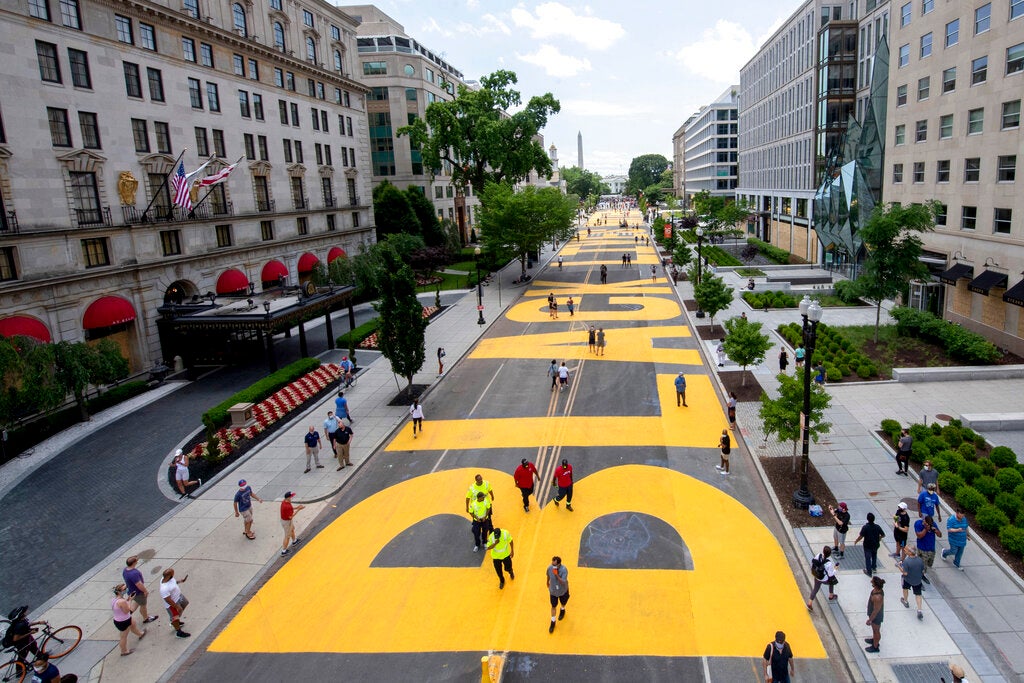 The Washington Monument and the White House are visible behind the words Black Lives Matter sign that has been painted in bright yellow letters on the 16th Street by city workers and activists on Friday in Washington. (Khalid Naji-Allah/Executive Office of the Mayor via AP)

WASHINGTON — The city of Washington capped nearly a week of demonstrations against police brutality Friday by painting the words Black Lives Matter in enormous bright yellow letters on the street leading to the White House, a highly visible display of the local government’s embrace of a protest movement that has put it even further at odds with President Donald Trump.

Mayor Muriel Bowser said the painting by city workers and local artists that spans two blocks is intended to send a message of support and solidarity to Americans outraged over the killing of George Floyd by police in Minneapolis.

It comes as the mayor has sparred with Trump over the response to the protests and as D.C. prepared for a demonstration on Saturday that was expected to bring tens of thousands of people into a city still under coronavirus restrictions.

“We know what’s going on in our country. There is a lot of anger. There is a lot of distrust of police and the government,” the mayor said at a news conference. “There are people who are craving to be heard and to be seen and to have their humanity recognized. We had the opportunity to send that message loud and clear on a very important street in our city.”

The letters and an image of the city’s flag stretch across the entire width of 16th Street to the north of Lafayette Square. The mural ends near St. John’s Episcopal Church, where Trump staged a photo-op on Monday after officers in riot gear fired tear gas and charged demonstrators to make way for the president and his entourage.

A sign now identifies that section of 16th Street near the White House as “Black Lives Matter Plaza.”

Bowser has complained about the heavy-handed federal response to the protests and called for the removal of out-of-state National Guard troops.

She says the differences with the Trump administration highlight the need for the District of Columbia to be a state and have more control over its affairs. They may also reflect the fact that Trump is deeply unpopular in the district, where Hillary Clinton won about 90% of the vote in the 2016 presidential election.

While not addressing the painted mural, Trump continued his attacks on Bowser in tweets Friday.

“The incompetent Mayor of Washington, D.C., @MayorBowser, who’s budget is totally out of control and is constantly coming back to us for ‘handouts,’ is now fighting with the National Guard, who saved her from great embarrassment over the last number of nights,” he tweeted. “If she doesn’t treat these men and women well, then we’ll bring in a different group of men and women!”

She shrugged off his criticism. “You know that thing about the pot and the kettle,” the mayor said at a news conference.

The local chapter of Black Lives Matter said it did not support painting the street and took a swipe at Bowser, who they see as insufficiently supportive of their efforts to combat abuses by the police.

“This is performative and a distraction from her active counter organizing to our demands to decrease the police budget and invest in the community,” it said on Twitter.

D.C. officials have longstanding grievances against the federal government.

Bowser and the D.C. Council have long resented Congress, which retains the right to alter and even reverse any city law. It was Congress, not Trump, that cost the District of Columbia more than $700 million in federal funding earlier this year by classifying it as a territory rather than a state in the first big coronavirus relief package.

But with Trump in office, Bowser’s relations with the White House seem to have eroded steadily over the past few years, finally developing into open public antipathy over the handling of the current protests.

Trump criticized Bowser and Washington’s Metropolitan Police Department for taking a soft touch with the protesters. He warned after the first night of protests that the Secret Service was ready to unleash “the most vicious dogs and the most ominous weapons I have ever seen” if protesters had managed to breach the security fence around the White House.

Bowser called Trump’s remarks “gross” and said the reference to attack dogs conjures up the worst memories of the nation’s fight against segregation.

The public feud has escalated from there, with Trump essentially usurping Bowser’s authority by ordering multiple federal agencies and the entire 1,700-member D.C. National Guard contingent into the streets.

On Thursday, as the protests remained peaceful, Bowser ended a curfew imposed after people damaged buildings and broke into businesses over the weekend and Monday.

In recent days, thousands of demonstrators have marched peacefully between the White House, Capitol and Lincoln Memorial. Volunteers make their way through the mostly masked crowds offering spritzes of hand sanitizer, free water and snacks.

Metropolitan Police Department Chief Peter Newsham said there had been no arrests on Thursday and Friday related to the demonstrations. Bowser said she would decide Saturday morning if they would reinstate the curfew for the weekend demonstrations.

Read Next
US will allow limited flights by Chinese airlines, not a ban
EDITORS' PICK
BuCor eyes building national prisons in all 17 PH regions
The Best Tech Gifts For The 2022 Holidays
House energy committee chair Arroyo bats for cheap electricity
No RITM layoffs amid push for new center
Abalos vows to fill jails with drug pushers
vivo’s coming to town to grant wishes with more holiday promos
MOST READ
LOOK: Vhong Navarro transferred to BJMP detention facility in Taguig
The Elephant Man in the Senate
Posh village as ‘shabu’ haven
LOOK: Zanjoe Marudo bonds with Ria Atayde, her family
Don't miss out on the latest news and information.