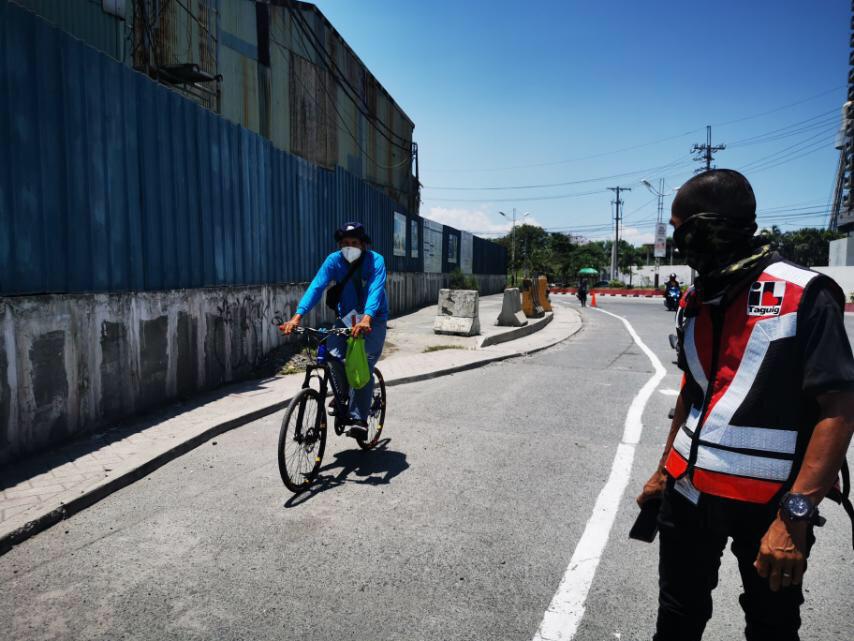 A biker tests the bike lane along Cayetano Avenue in Taguig City as the city government launched a “comprehensive” program to promote bicycles as an essential mode of transportation. Image: Courtesy of the Taguig City PIO.

MANILA, Philippines — In celebration of World Bicycle Day on Wednesday, the Taguig City local government launched a “comprehensive” bicycle program to promote biking as an essential mode of transportation.

The local government also announced that it was planning a lending program so city hall employees can use their bikes. This will be under the city’s Active Transport Office, which is tasked to “studying the ways Taguig could champion biking to citizens and become a bike-friendly city.”

“This will ensure the new culture is fostered where it was born. Taguig City will procure bikes and helmets, which may be borrowed by employees to travel between work and home,” the LGU said in a statement regarding the lending program.

“A bike patrol team will also be deputized to move around in bikes to ensure health and safety protocols are maintained in high foot traffic areas across Taguig. They are equipped with first-aid kits and tools for simple bike repairs, just in case their assistance is needed,” the LGU explained.

The Taguig City LGU added that it set up bike lanes along Cayetano Boulevard and Bayani Road, as well it has renovated the protected bike lane along C6 Road.

The bike lanes were for a three-day demo where it will showcase that biking is doable in Taguig, the LGU said.

The Active Transport Office, according to the city government, will also hone partnerships with the business sector that is expected “to play a central role in increasing bike-friendly spots across the city.”

“The Active Transport Office will contact malls and other establishments to provide bike racks for employees and customers, even to create programs to incentivize or subsidize those who would like to switch to biking as their method of transportation between work and home,” the LGU said.

“We treat people who embrace active mobility, such as cyclists and pedestrians, as first-class citizens. We are preparing the infrastructure, the incentives, and other measures to make transport in the city safe, inclusive, and sustainable,” city Mayor Lino Cayetano said.

Like Taguig, San Juan City is pushing the public to use bicycles as part of the “new normal”, as its LGU has set up pop-up bike lanes in some parts of the city.

Quezon City, meanwhile, said that it was planning to stretch the city’s bike lanes to 161 kilometers from the previous 55-kilometers.

The bicycle is one of the modes of transportation approved by the Inter-Agency Task Force for the Management of Emerging Infectious Diseases as Metro Manila was placed under general community quarantine (GCQ).

Interior and Local Government Secretary Eduardo Año likewise encouraged the public to use bicycles as the primary mode of transportation, and for LGUs to put up bicycle lanes in their respective areas.