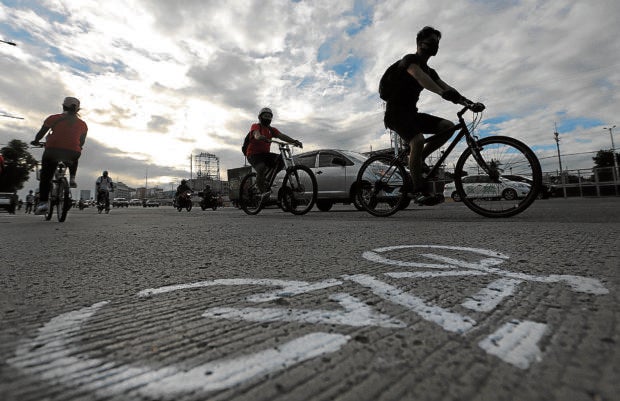 BIKERS’ CITY Cyclists make their way through Commonwealth Avenue in Quezon City on the first day of Metro Manila’s transition to general community quarantine. San Juan plans to make bike lanes a permanent fixture in the city to make it easier for residents to get to their destinations in the absence of public transport. —GRIG C. MONTEGRANDE

MANILA, Philippines — The Quezon City local government on Tuesday announced that it was planning to further stretch the bike lanes throughout the city to 161-kilometers from the previous 55-kilometers.

In a statement, city Mayor Joy Belmonte said that aside from the expansion of the bike lanes, the city government was also planning to upgrade the routes by placing barriers, signages, markers and other necessary infrastructures, ensuring the safety of those using bicycles.

Belmonte added that the QC LGU will be working with Move As One Coalition to plot the possible bicycle routes.

“This was a priority for us even before COVID-19 happened as part of our global commitment to reducing air pollution by 2030, but due to the pressing need for transport during the pandemic, and the bike culture that emerged as a result of this, we are fast-tracking its implementation,” Belmonte said.

The construction of the bike lanes will be done by the Parks Development and Administration Department (PDAD) and the Task Force on Transportation and Traffic Management (TFTTM) in the next few weeks, the mayor added.

The bicycle is one of the modes of transportation approved by the Inter-Agency Task Force for the Management of Emerging Infectious Diseases as Metro Manila was placed under general community quarantine (GCQ).

Interior Secretary Eduardo Año likewise encouraged the public to use bicycles as the primary mode of transportation, and for LGUs to put up bicycle lanes in their respective areas.

During the first day of GCQ imposed in Metro Manila on Monday, it was reported that several commuters had a hard time going to work due to limited public transportation.