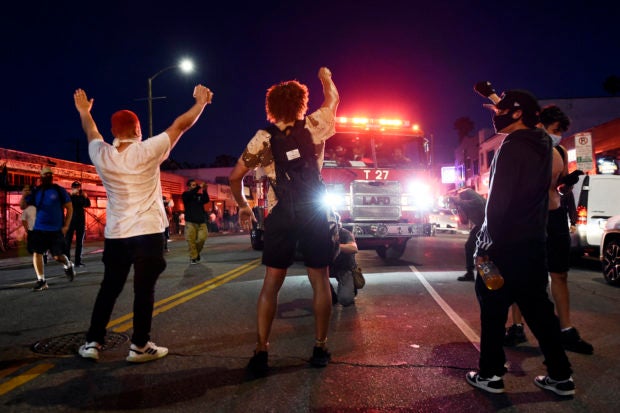 Demonstrators block the path of a Los Angeles Fire Department truck during a protest on Melrose Avenue, Saturday, May 30, 2020, in Los Angeles. Image: AP/Chris Pizzello

A prosecutor from Madison County in Mississippi, United States is under fire for commenting that she hopes the novel coronavirus spreads between protesters crying foul over the death of 46-year-old black man George Floyd.

Prosecutor Pamela Hancock has since deleted her comment on Facebook, which read, “We can only hope the deadly (coronavirus) strain spreads in riots!” as per Mississippi Today earlier today, June 3.

Her comment was made on a Facebook post from another person, name withheld, who jested, “Does Covid spread during massive street riots or just in bars and restaurants? Asking for a friend.”

Hancock has reasoned, however, that her comment was only made as a joke and that she was “just making light of it,” according to the report.

“My job is to prosecute all crimes, including civil disobedience,” Hancock was quoted as saying. “I’m against any breach of peace or criminal activity, and I would prosecute it. I have nothing against people peacefully protesting, but breaking into businesses and stealing things is a crime.”

“I was not serious about wanting anyone to die. That’s not who I am. The post was kind of a joke, and I was attempting to joke back,” she added.

Hancock admitted that she “did it very poorly,” and claimed that she does not hold “any ill will towards anyone or any group.”

The prosecutor’s supposed joke comes as people supporting the Black Lives Matter movement take to the streets to decry Floyd’s death and condemn injustices being committed against African Americans and other people of color.

Floyd, who was under arrest for suspected forgery attempt, died pleading for air as police officers pinned him down to the ground, with ex-officer Derek Chauvin kneeling on his neck for eight minutes and 46 seconds.

Other than the numerous protests throughout the U.S., Floyd’s death has led to looting, riots and clashes between protesters and police, as well as the torching of a Minneapolis police station.

Brandon Jones, a policy director at the Southern Poverty Law Center in Jackson, has meanwhile lamented how a public official could say such a comment during these times.

“You’d hope in moments like this that people throughout the law enforcement community and certainly prosecutors would be reflective about how we talk about these issues. Because she’s an elected official, it’s an office of public trust. Frankly, (her post) sends all the wrong messages,” Jones was quoted as saying.

He added that it is worrying when people in power like Hancock “say these things because of what message it might send to people who might have to face her in court.”

“It erodes the public’s trust that they’re going to be treated fairly with comments like this, even if they were in jest,” he said.

Several celebrities, including Rihanna, Ariana Grande and Dwayne Johnson, have also voiced out their indignation over Floyd’s death and have shown support to the Black Lives Matter movement. Ian Biong/NVG

Read Next
EU: George Floyd’s death was ‘an abuse of power’
EDITORS' PICK
Lacson wants DOF to suspend TRAIN law as oil prices rise
Next level mobile photography within reach with vivo X70 co-engineered with ZEISS
Leaked: A 60x Zoom and all-new Helio G96 mean a complete overhaul for TECNO Mobile’s new CAMON 18 series
153 protests filed vs China actions in PH waters in 2021 — DFA
Duterte blasts rights groups for overlooking the ‘other side’ of drug war
Delivering delight against all odds
MOST READ
Robredo to supporters: Be calm, gentle and do good deeds
Duterte inaugurates P684-M bypass road project in Quezon
Matibag calls Senate budget hearing ‘political,’ gets kicked out
Duterte: No drug dealers among the rich in PH
Don't miss out on the latest news and information.