Protests over George Floyd’s death spread across US 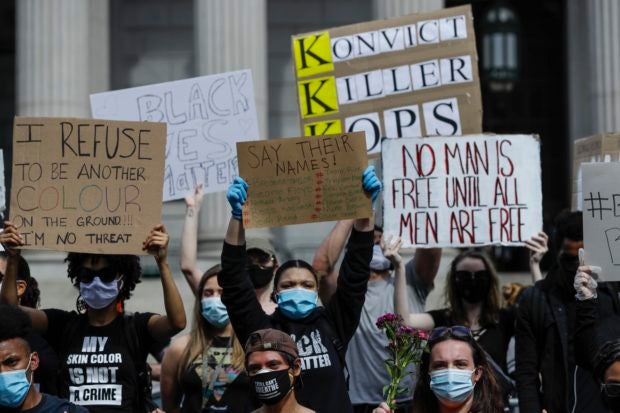 Protesters rally over the death of George Floyd, a black man who was in police custody in Minneapolis Friday, May 29, 2020, in New York. Floyd died after being restrained by Minneapolis police officers on Memorial Day. (AP Photo/Frank Franklin II)

Protests have spread across the United States, fueled by outrage over the death of a black Minnesota man, and years of violence against African Americans at the hands of police.

Demonstrators clashed with officers in New York and blocked traffic in Columbus, Ohio, and Denver.

Protesters in Atlanta appeared to shove officers and throw water bottles at authorities while protesting the death of George Floyd.

Hundreds of protesters confronted police outside CNN headquarters in downtown Atlanta late in the day. Protesters threw plastic water bottles and glass bottles at police. The bottles exploded behind the police line, but no officers appeared to get hit. Protesters chanted, “Quit your jobs.”

The officers backed up in a line away from the group of protesters who were throwing objects at them.

Earlier, as the protest appeared more calm, Kaity Brackett, 27, said she came out to the protest because she thinks the entire criminal justice system needs to be overhauled, starting with policing. She said the Ahmaud Arbery killing was a catalyst for her and referred to his death as a lynching. Arbery was killed on February 23 by a former district attorney investigator and his son, who were not arrested until after video emerged months later.

Brackett wore a blue mask and sat with her partner and a friend. She was less concerned about the threat from the coronavirus.

“We risk our lives going to the grocery store, going to get gas,” she said. “This is more important than all of that.”

Denver Mayor Michael Hancock called for calm and unity Friday after the first of several planned city protests over George Floyd’s death turned violent, declaring, “Let not the story be about the riots and protests. Let’s keep the focus on the life that was lost.”

“I can tell you not to go out and demonstrate but the reality is it’s going to happen,” Hancock said at a news briefing, stressing he shared outrage over what he’s called the “senseless and tragic murder” of Floyd in Minneapolis.

Hancock and Police Chief Paul Pazen blamed what they called a minority of agitators among peaceful protesters for inciting violence throughout downtown on Thursday. That violence included throwing rocks at police officers, setting small fires, and breaking windows and damaging cars at the state Capitol and at businesses. More protests were planned for Friday and Saturday. Pazen said three officers were injured and that 13 people were arrested for burglary, criminal mischief, and assault. 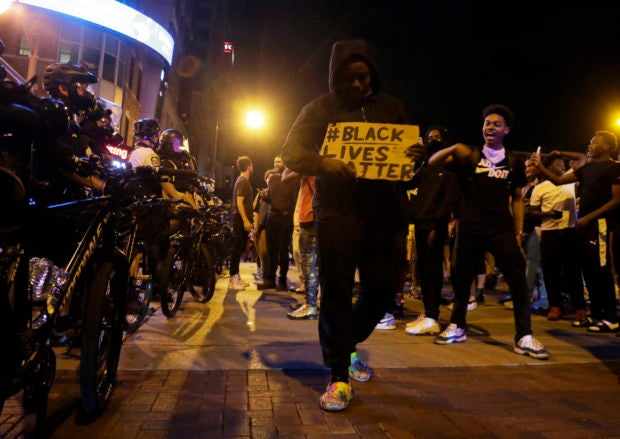 Protesters hold signs and walk past a line of police in downtown Columbus, Ohio, Thursday, May 28, 2020, during a demonstration over the death of George Floyd in police custody Monday in Minneapolis. Columbus police used pepper spray to disperse protesters after some threw plastic bottles of water, smoke bombs, and other items at police. Windows at the Statehouse and in bus stations along High Street were shattered, trash cans were tossed and decorative planters wrecked. (Barbara J. Perenic/The Columbus Dispatch via AP)

In New York, demonstrators took to the streets for the second day in protest of Floyd’s death, who was killed in police custody, and invoked the names of other black people who died at police hands.

“It’s my duty to be out here,” said Brianna Petrisko, among those at Foley Square in lower Manhattan, most wearing masks. The protest took place despite coronavirus prohibitions on large gatherings. The demonstrators were gathered in the square, while gathered police stood across the street.

“Our country has a sickness,” Petrisko said. “We have to be out here. This is the only way we’re going to be heard.”

The names of black people killed by police, including Floyd and Eric Garner, killed on Staten Island in 2014, were on signs carried by those in the crowd, and in their chants. Protests have taken place around the country, with some in Minnesota and elsewhere becoming violent.

At his Friday briefing, New York Gov. Andrew Cuomo said he stood with the Minnesota protesters.

“Nobody is sanctioning the arson, and the thuggery and the burglaries, but the protesters and the anger and the fear and the frustration? Yes. Yes. And the demand is for justice,” Cuomo said.

In Florida, a group of about 10 protesters gathered also Friday near a town home that belongs to a white Minneapolis police officer who knelt on Floyd’s neck.

The protesters arrived after social media postings listed the address of Derek Chauvin in the community of Windermere outside Orlando.

They carried signs that said, “He said I can’t breathe. Justice for George,” and “We see you, we hear you … we love you! #Justice for George.” The handcuffed black man pleaded for air as Chauvin, the white police officer, knelt on his neck during an arrest recorded on video by bystanders.

The Orange County Sheriff’s Office tweeted from its official account that Chauvin is not at the residence and is not expected there. The office said it’s confirmed he has no plans to be in the area.

Meanwhile, Albuquerque police used a helicopter and tear gas as they retreated from a crowd of people after a confrontation that followed a protest of Floyd’s death.

During the confrontation, protesters waved signs and yelled at officers clad in riot gear. Gallegos said Friday the tear gas was used to allow officers to leave the area and avoid further confrontation.

There were no reports of injuries from the gunshots, and it wasn’t clear whether that incident was related to the protest. Gallegos also said there were no injuries resulting from the confrontation with protesters.

Read Next
Minneapolis cop who knelt on man’s neck charged with murder
EDITORS' PICK
Communication woes postpone Bongbong Marcos’ radio interview
Step up your vlog game with vivo’s newest smartphone
NUSTAR Resort and Casino: Cebu’s next lifestyle and leisure gem
Rise to perfection: Spot on tiles for your stair risers
80% of of vaccinated adult Filipinos willing to get COVID booster shot, survey shows
COVID-19 cases in NCR, nearby provinces now going down — OCTA
MOST READ
Leni mansplained? Abunda ‘interruptions’ stir own buzz
6 areas to be placed under Alert Level 3 from Jan. 28 to Feb. 15
Communication woes postpone Bongbong Marcos’ radio interview
Gordon tells Duterte: I did not steal from Subic funds
Don't miss out on the latest news and information.