Jinggoy Estrada says politics behind his being held by police 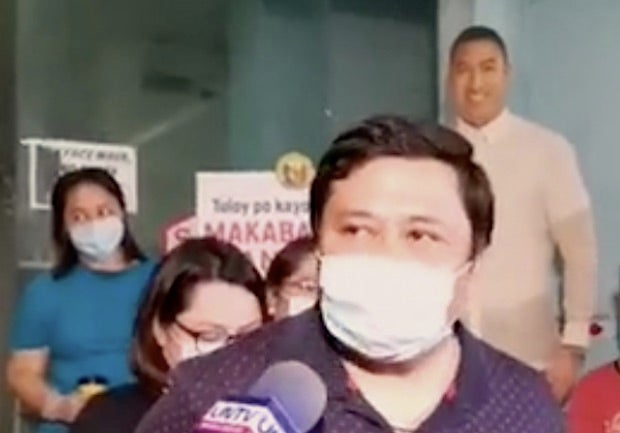 Former Sen. Jinggoy Estrada gives a statement to reporters outside the San Juan City Police Station on his being held for allegedly violating quarantine rules on Sunday, May 3, 2020. (Photo from a video on his Facebook page under the name CitiSen Jee)

MANILA, Philippines — Former Sen. Jinggoy Estrada believes he was being singled out and that there was politics involved when authorities brought him to the police station on Sunday for allegedly violating quarantine measures in San Juan City.

In an interview with reporters in front of the San Juan Police Station, Estrada said he never violated any quarantine protocol during his food relief operations across the city.

“In my own opinion, I never violated any law, especially to ECQ [enhanced community quarantine]. I don’t blame the police. They’re just doing their job. I do not have anything against them. This is local politics. The current administration of San Juan does not want us to help,” he said, referring to San Juan City Mayor Francis Zamora.

Posted by Janella Ejercito Estrada on Sunday, May 3, 2020

“People are hungry, have no work, He should understand that. What he’s asking me again is for a permit,” he said, speaking partly in Filipino. “There are a lot of civic organizations, nongovernment organizations, private citizens, civilians like me who are distributing or donating relief goods here in the city of San Juan without any permit. Why are they singling me out? Just because I’m an Estrada?”

In the May 2019 elections, Zamora won the mayoralty over Janella Marie Estrada, the former senator’s daughter, and ended the Estrada clan’s 50-year grip on the city.

According to the San Juan City Police chief, Col. Jaime Santos, Estrada was found to have violated social distancing measures during food distributions. He also did not have a permit to conduct relief operations from the city government.

Estrada said he has been conducting relief operations for the past two weeks. But on Sunday, the police invited him to the police station.

“I made it a point that every time [I distributed food] for the people to observe social distancing,” he said. “I’ve been doing this for the past two weeks. All of a sudden, when I was distributing bangus [milkfish] earlier in Barangay Salapan, policemen came and invited me over here for some interrogation.”

“They told me I violated certain provisions of the enhanced community quarantine. They said they have photos that the people were not observing social distancing so. But I was pretty confident that my staff instructed the people to observe social distancing,” he added.

After a couple of hours in the police station, Estrada was let off with a warning.

In a separate statement, Zamora denied that there was politics involved in Estrada’s “arrest.”

“The arrest of Mr. Jinggoy Estrada has nothing to do with politics in San Juan but has everything to do with law and order. especially so now that we are collectively fighting this global pandemic,” he said.

Zamora said Estrada is not a “person authorized outside of his residence.”

This means Estrada has no authority “to be roaming around the streets,” according to the mayor.

“Only persons authorized by the government are allowed to do this,” he added.

He said Estrada also did not coordinate with nor did he secure a certification from the city government o conduct relief operations.

The PNP arrested Mr. Jinggoy Estrada earlier today, May 3, 2020 due to violations of guidelines and directives set by the IATF and DILG now that our country is fighting the COVID-19 pandemic, with the whole NCR under ECQ. Here is my official statement regarding the arrest. pic.twitter.com/zSYxWkvakr

“This is for the purpose of ensuring that the standing orders of the IATF (Inter-agency Task Force) and DILG [Department of the Interior and Local Government] will be observed strictly such as but not limited to social distancing, peace and order and health and sanitation,” he added.

According to Zamora, Estrada “grossly disregarded” and violated the guidelines and directives of the IATF and the DILG.

He said Estrada has been conducting distribution of fish “in an unsanitary manner” and that social distancing was not observed.

“I am saddened by the fact that the former senator is not respecting the rule of law. Being a former lawmaker himself, he is expected to be the first to abide by laws of the country,” Zamora added.