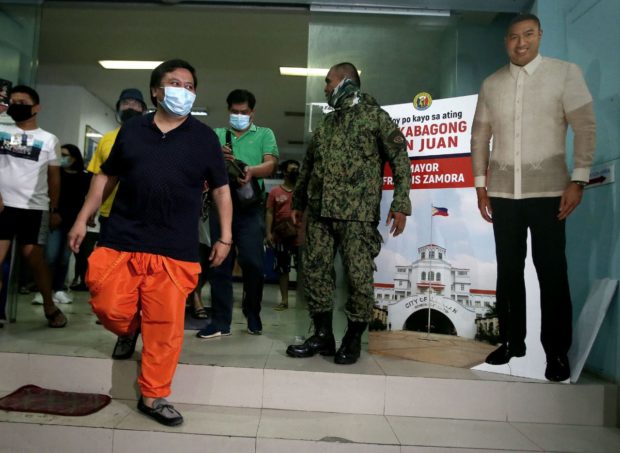 Former Senator Jinggoy Estrada leaves the San Juan City Police Headquarters after he was brought to the station for violating guidelines of the enhanced community quarantine (ECQ, while distributing food to residents of Barangay Salapan on Sunday May 3. RICHARD A. REYES/PHILIPPINE DAILY INQUIRER

MANILA, Philippines — Former Senator Jinggoy Estrada was brought to the San Juan Police Station on Sunday for allegedly violating rules of the enhanced community quarantine (ECQ) when he allegedly held an unauthorized distribution of bangus (milkfish) in San Juan City.

“(Former) senator Jinggoy Estrada was invited to our station and we let him explain the manner he distributed the bangus (milkfish) to the people in San Juan,” Santos said.

Santos said Estrada was later let off with a warning and was told that if he wants to continue with his food distribution activities, he should first get a permit from the city government and ensure that social distancing measures are strictly observed.

Santos said the former senator was also “given this stern warning not to do it again because we will again be forced to effect his arrest.”

Zamora said any organization or individual who plans to conduct relief operations must first secure a certification from the local government unit to ensure that it would abide by social distancing measures and safety protocols.

In the Facebook live video posted by Estrada’s daughter, former San Juan City Vice Mayor Janella Ejercito Estrada, the ex-senator can be seen being led to the police station with his family following.

According to Santos, Estrada has already been sent home.