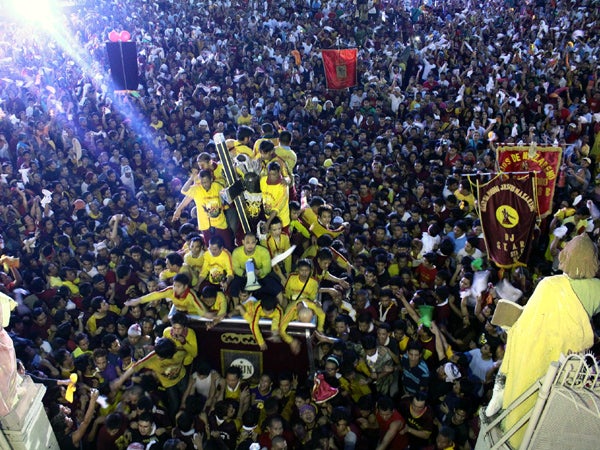 AS A NEW MORNING SHINES… The Black Nazarene is brought back to the Quiapo Church 6 a.m. Tuesday after a nearly 24-hour long procession, the longest ever, that "stumbled three times, and rose up three times," according to Msgr. Clem Ignacio, Parish Priest of Quiapo Church. He commended the devotees who chose to go on despite the mechanical failure of the float and being tired from the day-long procession. MATIKAS SANTOS/INQUIRER.net

MANILA, Philippines — The Black Nazarene finally returned to its home in Manila in what its parish priest claimed was “the longest procession ever” in the history of the annual religious festival.

It took 22 hours, a “wheel-less” carriage, a broken rope, and a frenzied mob to bring the Black Nazarene from the Quirino Grandstand early Monday to the Quiapo Church at around 6 a.m. Tuesday when Monsignor Clemente Ignacio celebrated mass to welcome back what has also been known as the Black Christ.

“The procession was the longest ever procession of the Black Nazarene at nearly 24 hours,” Msgr. Ignacio said in an interview.

It had “stumbled three times, and rose up three times,” Ignacio said in his address to the waiting crowd, referring to how Jesus Christ fell three times while carrying his cross on the way to Calvary.

The first time, two wheels on the carriage carrying the Black Nazarene blew out due to the weight, he said.

Brother Nick Salimbagat, who headed the procession, said they were passing the Manila hotel when it happened.

LONGEST NIGHT Devotees sleep on what free space they could find at Plaza Miranda, sometimes with nothing between their skin and the cold hard pavement. MATIKAS SANTOS/INQUIRER.net

Two more wheels blew out as the procession was nearing the Liwasang Bonifacio, just past the Manila City Hall, Salimbagat said.

It was at that time that Msgr. Ignacio personally went to the procession to check the situation, he said.

Salimbagat said that at around 10 p.m. of Monday when the procession was about to cross Villalobos street, which would have led to Plaza Miranda and Quiapo Church, the organizers thought of ending it there instead of continuing with the planned route.

One of the organizers at the Quiapo Church began appealing to the devotees at the Plaza Miranda to let the procession pass because it was late and the carriage had no wheels left.

By 10:45 p.m., another appeal, through a public address system hooked up to a van, was sent to the crowd.

But Ignacio said that the devotees carrying the Black Nazarene insisted on continuing with the original route.

The procession arrived at Plaza Miranda around 5:15 a.m. with some 5,000 devotees left waiting, huddled together and were sleeping on whatever free space they could find with nothing more than their clothes between their skin and the cold cement, Salimbagat said.

Whatever complaints there were disappeared as the tired but still eager crowd started throwing towels and towelettes to the marshals atop the carriage as the procession stopped at the Minor Basilica’s doors before the Black Nazarene was finally carried to its honored place inside the church.