MANILA, Philippines—After 22 hours, the Black Nazarene returned to its home at the Quiapo Church. 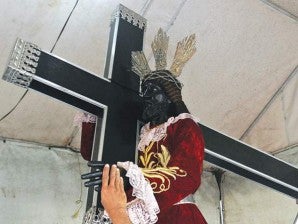 FACE OF THE BLACK NAZARENE A devotee touches the hand of the Black Nazarene inside Quiapo Church in Manila. Millions of devotees joined the procession of the Black Nazarene, a life-size wooden statue of Jesus Christ carved in Mexico and brought to the Philippines in the 17th century. RAFFY LERMA

The longest procession in the history of the feast of the Black Nazarene ended at around 6 a.m. Tuesday.

Complaints of devotees, driven to wait for several hours, were forgotten as the mulatto Christ was steered into Plaza Miranda at around 5:10 a.m. They started throwing towels and towelettes to the marshals atop the carriage as the procession stopped at the minor basilica’s doors.

A Mass will be held to conclude the religious event.

The procession left exhausted devotees on its wake as people who had kept vigil found their beds on sidewalks and elevated steps along the long traditional route.

The Black Nazarene’s return  could have been cut short at 10 p.m. Monday had devotees agreed to allow the main carriage to go through Villalobos Street from Carlos Palanca Street as the float descended Mac Arthur Bridge.

The Black Nazarene procession, which began at around 8 a.m. Monday, was delayed for several hours when the carriage bearing the image was stalled because its wheels broke.

Read Next
I’m sticking with minority bloc, says Lagman
EDITORS' PICK
Look Through: The fate of impounded stray dogs
House energy committee chair Arroyo bats for cheap electricity
What to watch out for when selecting a video surveillance solution
23,000 cops to be deployed nationwide for school reopening
Unleash the photographer in you this World Photography Day with vivo smartphones
DOH says COVID-19 cases plateauing, but public shouldn’t be ‘complacent’
MOST READ
Sharon Cuneta asks for prayers for friend in ICU who suffered silent stroke
Light therapy could be the answer to your sleep problems
Korina Sanchez reunites with former ABS-CBN co-anchors Julius Babao, Cheryl Cosim
PBA: San Miguel ousts Meralco to arrange finals duel vs TNT
Don't miss out on the latest news and information.