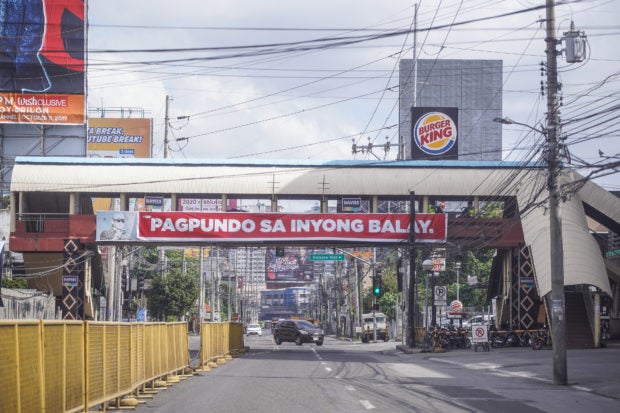 IMPORTANT REMINDER A streamer at a pedestrian overpass in Davao City reminds residents to stay at home amid the rising cases of COVID-19 infection in the city. —KARLOS MANLUPIG

As of March 31, Davao City ranked sixth among localities in the country with the most COVID-19 cases, with Quezon City (130 cases) leading the list, the COVID-19 tracker of the Department of Health (DOH) showed.

Davao recorded the highest number of infections outside of Metro Manila.

Davao City Mayor Sara Duterte, the President’s daughter, noted that many among the 41 cases in the city “are persons without travel history [to known COVID-19-affected places] but still got infected by the disease.”

“We now have confirmed local transmissions,” she declared on Monday afternoon.

The first four patients in the city all came from Metro Manila where they could have contracted the virus. Six of the 41 cases had died as of March 31, while four had recovered.

“There has been a patient who acquired the disease without a travel history from virus-contaminated areas and did not attend the cockfight event in Matina [District],” Mayor Duterte said.

The Matina Gallera derby from March 6 to March 13 is of special interest to health authorities as many who came from the event reported symptoms of the disease and were tagged as persons under investigation (PUIs).

A 67-year-old man in Tubod, Lanao del Norte province, who has no recent travel history except being in Matina for the derby, has tested positive for COVID-19.

Duterte said local health personnel had been continuously tracing those who went to the derby which generated a number of PUIs in the city.

As cases surged, she advised the public not to panic, assuring that health authorities and the local government were on top of the situation.

She urged people not to focus on the numbers but “more on the preventive measures, on how to not acquire the disease.”

“Take the precautionary measures. Stay at home, wash your hands regularly and observe social distancing. People are also mandated to wear the proper masks when going out of the house,” Duterte said.

The city has been part of Davao’s unified regional lockdown since March 17, allowing only the movement of cargo and goods to and from the rest of the country.

After the President cut off all flights to and from Metro Manila on March 15, the Davao mayor also canceled all flights from Clark International Airport in Pampanga province, fearing that those who would try to sneak out of the National Capital Region would use the Clark-Davao flights, risking the transport of the virus into the city.

Duterte said the city government was preparing to declare an enhanced community quarantine for Davao, which could also snowball into a common measure for the rest of the region.

It is necessary for the region, Duterte said, to slow down the transmission by restricting the movement of people and to conduct accurate contact tracing.

The mayor also said she would ask the national government to defer the resumption of flights from Metro Manila to Davao to avoid the spread of the virus and to reduce the number of local COVID-19 cases.

—WITH A REPORT FROM RICHEL UMEL

Read Next
DOT stops ‘sweeper’ flights for stranded foreign tourists
EDITORS' PICK
New strategies urged to improve public transport
Chaos as thousands return to work in Metro Manila
Cherry Mobile teams up with Cloud Panda PH, launches online store
Leveling up your ‘lutong bahay’ with the kitchen companion you never knew you needed
Senate OKs on 3rd reading bill allowing school opening after August
Someone from the Philippines can become $356 Million richer this Tuesday
MOST READ
‘If I had not been SolGen, I will make you eat your words,’ Calida tells Coco Martin
51 percent of German firms holding back investments in PH, but not because of COVID-19
Chaos as thousands return to work in Metro Manila
Restaurant dine-in operations approved in MGCQ areas
Don't miss out on the latest news and information.