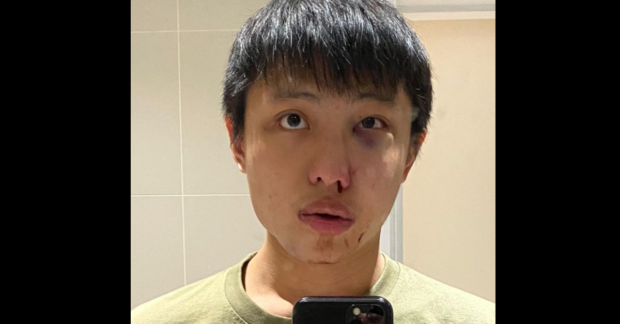 A Singaporean student based in London, United Kingdom has become one of the most recent victims of racist attacks over the global outbreak of the novel coronavirus.

Jonathan Mok, 23, took to Facebook earlier today, March 3, to spread awareness on how racism “has found yet another excuse to rear its ugly head,” after he got assaulted by a group of youths on the street.

Mok said that around 9:15 p.m. on Feb. 24, he was walking through Oxford Street when he was assaulted by three to four young men and a woman, whom he described to have “seemed no older than 20 years old, but were all more than a head taller than me.”

“I walked past a group of young men, when I saw one of them look at me (just as he walked past me) and said something to me, which I could make out the word ‘coronavirus.’ I was stunned and turned around to have a look at the man [who] made the statement,” Mok recounted.

“He was still staring at me as he walked past and [realized] I was looking at him. He shouted ‘Don’t you dare look at me, you ____’ (I could not catch the last word because of the accent),” he added. “I was shocked and angry because he directed a racist remark at me and had the audacity to shout at me like I had wronged him. ”

A few seconds later, Mok said they went up to him and was sucker-punched by one of the men, and was quickly followed up with another one as he was still reeling from the first.

Passersby then intervened and stopped the group from further attacking Mok. As he was explaining to one passerby that he did not do anything, one of the young men tried to kick him and said, “I don’t want your coronavirus in my country.” The attacker then swung another sucker punch at him, which resulted in his face “exploding with blood.” The group then fled before police arrived, according to Mok.

Mok said doctors told him he had sustained a few fractures and might need to undergo reconstructive surgery.

“Racism is not stupidity — racism is hate. Racists constantly find excuses to expound their hatred — and in this current backdrop of the coronavirus, they’ve found yet another excuse. From refusing service to a Chinese-looking person to racially-motivated hate crimes, every single one of these acts are based on racism,” he stressed.

London’s Metropolitan Police confirmed that an attack did take place along Oxford Street at around 9:15 p.m. on Feb. 24, as per Singaporean news outlet Channel News Asia earlier today. The perpetrators have yet to be found nor identified, as of writing.

British health authorities have reported that there is a total of 35 novel coronavirus cases in the U.K. as of March 1. Globally, more than 90,000 people have been infected while over 3,100 have died, according to the World Health Organization.

Similar cases of hate crimes have also been reported in different parts of the world amid the spread of COVID-19, the disease caused by the novel coronavirus.

A Filipino was recently involved in a brawl in Italy after being attacked in Casalpusterlengo, one of the 11 towns on lockdown there; the attackers thought he was Chinese. In the United States, a woman wearing a face mask in a New York City train station was attacked and was called a “diseased b*tch.”