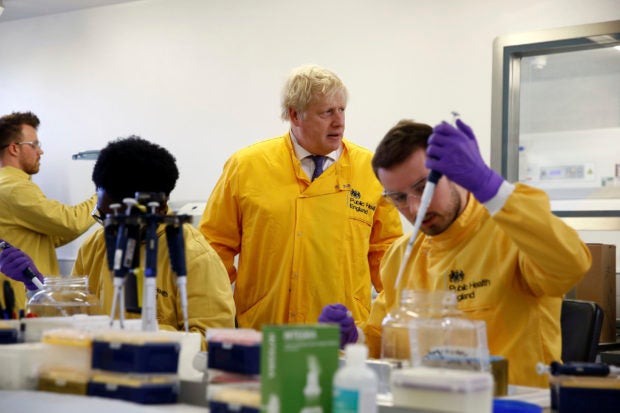 The British government’s chief medical officer, Prof. Chris Whitty, said one of the new patients “had no relevant travel and it is not yet clear whether they contracted it directly or indirectly from an individual who had recently returned from abroad.”

Whitty said medical workers were still investigating the cause of that infection.

Three of the new COVID-19 patients in Britain were contacts of an existing patient while six newly infected people had recently traveled from Italy and two had arrived from Iran. Both countries have been hard hit by the coronavirus that emerged late last year in central China.

British Prime Minister Boris Johnson told reporters Sunday at a health center in London that he was “very, very confident” that Britain’s National Health Service can cope with the virus outbreak.

“(It’s) likely to spread a bit more, and it’s vital therefore that people understand that we do have a great plan, a plan to tackle the spread of coronavirus,” he said.

Coronavirus infections in Italy rose 50% Sunday and the U.S. government issued its strongest travel warning yet, advising Americans against any travel to two regions in northern Italy — Lombardy and Veneto.

Authorities said the total number of people infected in Italy had risen to 1,694, a 50% jump from just 24 hours earlier and the highest figure by far in Europe.

Five more people infected with the virus have died, bringing the deaths in Italy to 34, while 83 people have fully recovered.

In London, the Foreign Office confirmed that non-essential staff, as well as dependants, are to be pulled out of the British Embassy in Tehran due to the spread of the virus in Iran.

Elsewhere in Europe, France raised its number of reported cases to 130 on Sunday, including one in the French Caribbean island of Guadeloupe, the first in France’s overseas territories.

The spreading virus epidemic shut down France’s Louvre Museum on Sunday, with workers who guard its famous trove of artworks fearful of being contaminated by the museum’s flow of tourists from around the world. Almost three-quarters of the Louvre’s 9.6 million visitors last year came from abroad.

Czech Health Minister Adam Vojtech said Sunday that two COVID-19 patients were hospitalized in Prague and another in northern city of Usti nad Labem. All three had travel ties to northern Italy.

Spain said it now has 71 virus cases, many of them linked to Italy.