newsinfo / Nation
Nation
‘WHY SHUT IT DOWN?’

Emerging from the Senate public services committee hearing on the franchise of the media giant, Poe said senators who were first apprehensive about the issue of ABS-CBN’s franchise had changed their minds on the matter.

“One thing’s for sure, at least in this discussion, more of the senators are convinced that if there are violations, and there are, that it doesn’t necessary merit a cancellation of the franchise,” Poe told reporters in an interview.

[In my view, we have fellow senators who started to have misgivings about this issue of ABS-CBN. But they heard directly from the stories of employees about the benefits that have been getting. So they somehow changed their minds.]

Not capital punishment right away

According to Poe, ABS-CBN’s alleged violations should not merit the cancellation of its franchise right away.

[We have heard from the NTC that some violations do not require automatic cancellation. It doesn’t require outright capital punishment. Outright execution is not the judgment required here.] 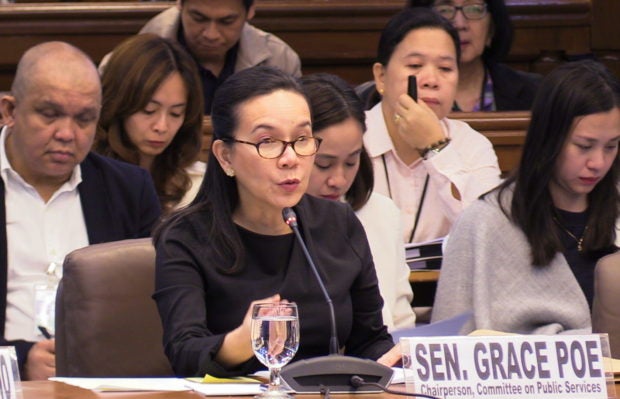 Sen. Grace Poe, chairman of the Senate Commitee of Public Services, leads inquiry on the renewal of the ABS-CBn franchise renewal on Monday, Feb 24, 2020. (Photo by CATHY MIRANDA / INQUIRER.net)

She also repeated her assertion that “a franchise is an act of legislative grace.”

[This is not a right that implies ‘it’s for anyone and everyone,’ but it’s a privilege given only to those who can comply with the requirements.]

She also noted that the franchise is a “responsibility to serve the people.”

“As such, franchise holders are accountable first and foremost to Congress as the representatives of the people. Ang lahat ng may hawak ng prangkisa ay nananatili sa aming gabay at patnubay,” she added.

[All those who hold a franchise remain under our guidance and direction.]

“ABS-CBN is not an exception. This is a test case for every broadcasting entity that forms part of the economy,” she further said.

During the hearing, Senate President Pro Tempore Ralph Recto also pointed out that the network should not be shut down and should only be penalized if it indeed committed any violations of the terms of its franchise.

“Many of these issues, assuming there are any violations, pwedeng penalty lang [would only require a penalty],” Recto said.

“I don’t think that this warrants a death penalty or a capital punishment na papatayin natin yung kumpanya [that would kill the company],” he added.

The Securities and Exchange Commission (SEC) and the Bureau of Internal Revenue (BIR) and the NTC cleared ABS-CBN of any violations when asked during the hearing.

[We’re going to kill it. Death penalty. But then it turns out there’s no death penalty. Why should shut it down when there’s no such penalty? Is it commensurate? Assuming that there will be a penalty, so let’s just impose a fine. Why do we need to shut it down?]

Poe’s panel opened its first hearing on the franchise of ABS-CBN as the lower chamber has yet to act on pending bills before it.

The franchise of the network is set to expire on May 4, according to Justice Secretary Menardo Guevarra.

READ: ABS-CBN’s franchise expires on May 4, not March 30 — DOJ chief

In the petition, Calida accused the network of “abusive practices.”

ABS-CBN maintained, however, that it did not violate any law governing its franchise and that it had secured all necessary approvals for its business operations.