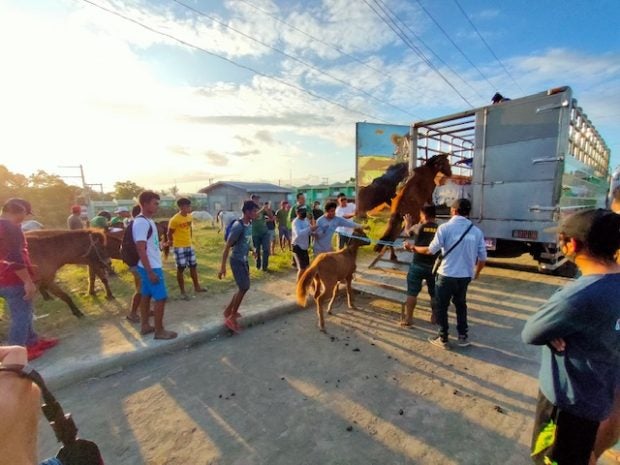 WANTED: NEW HOME Some of the rescued horses are loaded into a cattle truck bound for the Department of Agriculture (DA) compound in Lipa, Batangas. The DA has given PAWS until the end of February to find permanent homes for these animals.

MANILA, Philippines — At the grassy compound of the Department of Agriculture (DA) in Lipa, Batangas, 55 horses rescued from Taal Volcano Island were frolicking, grazing, chilling in the shade, or being groomed or checked by veterinarians.

It was Feb. 12, exactly a month after Taal’s eruption. The pleasant scene was a far cry from most of the horses’ miserable existence ferrying tourists around the island, which took a turn for the worse when the volcano erupted.

News of people cramped in evacuation centers, trying to come to terms with having lost everything they owned, was disheartening. But equally so was the plight of the animals left by their owners for various reasons in the haste to evacuate the island.

When Anna Cabrera, executive director of the Philippine Animal Welfare Society (PAWS), received phone calls and messages on Jan. 13 that some horse owners had returned to Volcano Island and needed help in rescuing the animals, she had to do something fast.

The lockdown of the island prevented PAWS staffers from conducting the rescue themselves, but with a media worker’s help, Cabrera was able to convince the horse owners to use their own boats to transport the animals to the town of Talisay.

“They were still waiting and hoping for a massive rescue of the animals, but I [told] them that it might not happen and that it would be best to bring their horses to Sampaloc, Talisay, where PAWS would be waiting for them,” Cabrera said.

The rescued horses eventually ended up in the town of Balete, which turned out to be a better place because it had less volcanic ash and still had patches of grass on which the animals could feed.

Cabrera sought the help of Dr. Romy Modomo — president of the Philippine College of Equine Practitioners and a longtime partner of PAWS in its project involving the horses of Intramuros, Manila — to check on the animals’ condition and treat the wounded and the weak.

But when Balete was included in the expanded danger zone and mandatory evacuation was declared, PAWS had to quickly find a safe place for the horses. Thankfully, Modomo was able to make arrangements.

“He said he knew the city veterinarian of Lipa where the DA office is located, and that he’d see what he could do. On my part, I called up all our donors who owned vehicles that could transport the horses. We were able to get help from a donor in Batangas who lent us a cattle truck,” Cabrera said.

The Lipa DA initially sheltered 43 horses, but when other evacuees learned that PAWS had a safe place, the number rose to 56. Most were in bad shape — thin, dehydrated, and afflicted with burns and respiratory problems.

It was a miracle that two, Bella and Kiko, survived. Bella is the horse in the video that went viral: her coat covered in volcanic ash, her nose dripping with a yellow fluid. Kiko had burns all over his body; he was found almost buried in the searing ash and had to be dug out. 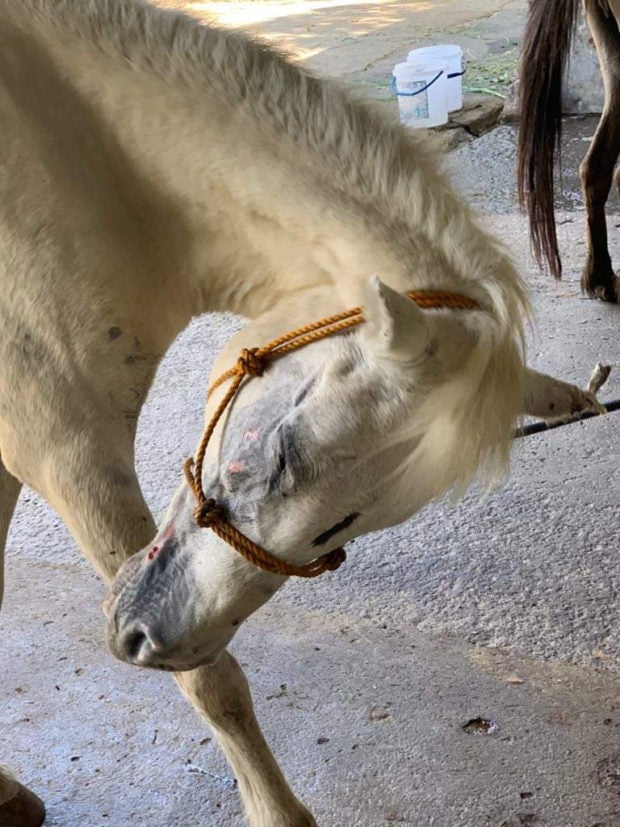 HER RESCUE VIDEO WENT VIRAL Bella, who was badly injured during the Taal eruption and whose video went viral, is now recovering at Lipa DA. —PHOTOS BY THE PHILIPPINE ANIMAL WELFARE SOCIETY

The two are both doing well and on the way to recovery. But one horse wasn’t as lucky. Princess, who survived for days on Volcano Island without food and water, died on Jan. 23 due to respiratory problems.

Down to 55, the horses were getting healthy. But PAWS soon faced a new problem.

Said Cabrera: “I was getting reports that the owners, out of desperation, were selling their horses to other parties. They want out because the government offered to relocate them in a housing project that could not accommodate their horses.”

Cabrera said that while she understood the circumstances that led to the horse owners’ decision, it bothered her and her colleagues that after asking other people for donations for the care of the horses and nursing them back to health, the animals would eventually be sold by their owners and likely end up in the slaughterhouse.

So, together with DA municipal officers, Cabrera met with the horse owners to discuss the situation. She told them that PAWS wanted to arrange adoption so the horses could retire, but that it could not be done if they still had ownership of the animals.

“We knew that the horses were the source of their livelihood. We said we were aware that they were talking to other people for the sale of their horses, and that they needed money,” she said.

Cabrera said that when PAWS offered to buy the horses for a reasonable price, 44 owners agreed to sell.

“The 11 others probably felt that their horses deserved a better price, and admittedly their horses looked really good compared to the 44. They were probably the ones who were evacuated early and did not sustain any injuries. One of them was even used by Coco Martin in one of his movies,” she said.

After PAWS completed the legal requirements for the adoption of the 44 horses, it was time to find people willing to give them a loving retirement home.

“Surprisingly, there is huge sympathy for and interest in the horses. Aside from private individuals, we had queries from celebrities, too,” said Cabrera.

Celebrity or not, PAWS’ main goal is to make sure that the horses end up in farms where they can enjoy the rest of their years.

“God knows how much they’ve worked all their lives. If you watched vlogger and PAWS volunteer Bani Logrono’s documentary on the horses of Taal, you’d see how hard they worked and how badly they were treated,” said Cabrera.

Despite the donations that PAWS has been receiving for the horses, it has to sustain its funds for the animals’ upkeep and expensive medications.

A fundraiser on Feb. 12-13 brought participants to the Lipa DA compound where they bonded with the horses and met up with PAWS volunteers who have been tirelessly tending to the afflicted horses and other animals.

The Lipa DA has given PAWS until the end of February to find permanent homes for the horses. PAWS is doing its best to have all the horses adopted before then and is thankful that a donor has agreed to temporarily house those that will not be adopted.

Taal Volcano’s eruption produced scenes of tragedy, despair and hopelessness, but also brought out the best in people. Let’s not forget the unfortunates. Man and beast, they need and deserve help.  INQ(For information on donations for the animals of Taal, please visit the PAWS website at paws.org.ph).