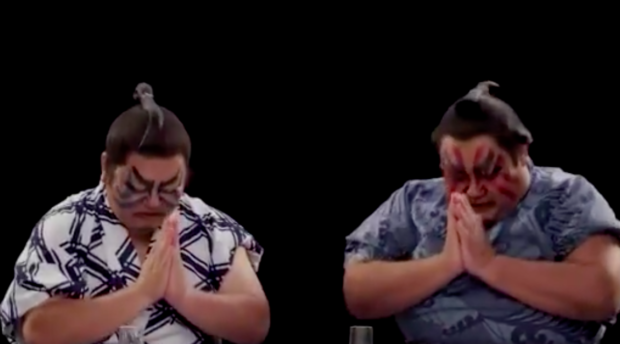 Two Japanese men bow down in respect to their food. Image: screenshot from Facebook/@nhkworld

Who says laying down rules is supposed to be always deadpan serious? Japan certainly does not think so, and their new tourism video urging tourists to obey and respect their laws and traditions proves the point.

Despite being only 39 seconds long, Japan’s new, quirky tourism promo was able to showcase several Japanese customs and traditions while also asking tourists to be respectful and responsible. The promo was uploaded by state-owned Japanese television network NHK World on Twitter yesterday, Jan. 27.

Japan's tourism ministry has released a new video it hopes will help travelers visit the country in a respectful and enjoyable manner. pic.twitter.com/sORTtmi81a

The video starts with a samurai, donning a straw hat and the traditional Japanese garment yukata, who flashily points a katana to a “no photographs” sign.

The narrator then talks about how “old buildings are works of art,” as clips of ninjas stopping other mischievous ninjas from damaging or stealing from the structures play out.

While the narrator asks tourists and pedestrians to stay inside white lines when traveling or commuting, a line of Karateka (Karate practitioners) march down, doing forms — they were inside the white line, of course.

A Japanese geisha, dressed in a kimono and covered with ivory white makeup, meanwhile waves her fan with a “no cellphones” sign as the narrator asks tourists to respect the rule.

“Saying ‘gochisosama’ after you finish eating shows your gratitude for the food and to the people who prepared it,” the narrator explains amid two Japanese men, seemingly sumo wrestlers, bowing down in front of their food. He adds, “If you can do this, you’re really cool.”

The Japanese tourism ministry stated that “it hopes visitors will watch the video while traveling, and that it helps them have an enjoyable stay in Japan.” JB