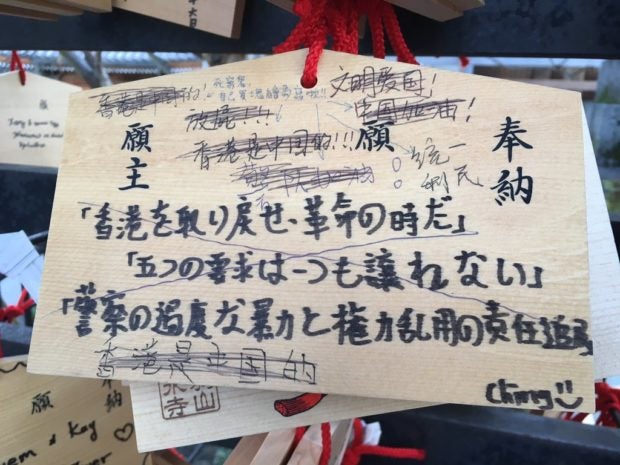 The fight for Hong Kong’s freedom from China has reached sacred Japanese shrines, as people have been vandalizing prayer boards originally containing wishes and messages in support of the Hong Kong protests.

Several Shinto shrines and Buddhist temples have been reporting that their prayer boards with pro-Hong Kong writings are being vandalized, as per NHK News Web via Sora News 24.

These prayer boards, known as “ema,” are found in Shinto shrines and Buddhist temples. The practice of writing on these small wooden boards is a centuries-old Japanese tradition, where they write their personal wishes and leave them at the temples or shrines so their gods may grant them.

Some of the messages the original owners of the vandalized ema wrote were “Hang in there, people of Hong Kong,” and the protesters’ famous rallying cry, “Liberate Hong Kong, revolution of our time.”

Some pictures of the vandalized ema were shared by one Twitter user @nursemens4321. The original messages were either written over or crossed out.

Most of the original messages, as well as the vandals used to deface them, are written in Chinese, while in some cases, English, as per report. Japanese visitors often write personal wishes in ema while broad social changes and general wishes are often made by foreign tourists.

To try and solve the problem, the report stated that Hokoku Shrine put out signs written in Chinese, English and Japanese, appealing to tourists to not vandalize. Ian Biong/JB

Filipino bartender in HK imprisoned for ‘loitering’ inside female toilet