SHARIFF AGUAK, MAGUINDANAO — Suspected extremists set off a roadside improvised bomb along a narrow road here and exploded it while the car of a ranking Moro rebel leader was passing by Sunday morning. 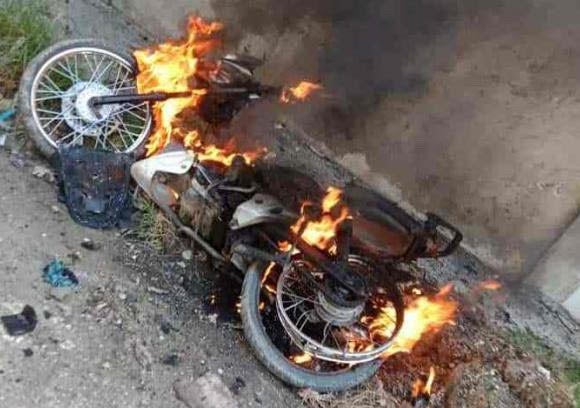 This is what is left of the motorbike after the improvised bomb rigged underneath it was set off in Shariff Aguak, Maguindanao on Sunday, November 24. A rebel leader claims he was the target of the attack. CONTRIBUTED PHOTO

Nobody was hurt but the pick-up vehicle sustained damages, according to Col. Arnold Santiago, Maguindanao police provincial director.

Commander Ampatuan was not in the car but his followers identified by police as Arsad Lintang, Jumer Mamasapano, Norodin Sansaluna, Johaimirin Sansaluna, and driver Jeanor Lintang were. They all escaped unhurt.

In a radio interview, Commander Ampatuan said he believed he was the target of the attack and that he knew who did it.

Santiago said the IED was detonated using a mobile phone. He said the Islamic State (IS)-linked Bangsamoro Islamic Freedom Fighters (BIFF) could be behind the attack since the IED used had the signatures of BIFF and bore similarities to those set off in populated areas in South Central Mindanao region.

The explosion Sunday morning was preceded by the discovery of three improvised bombs and bomb-making components by government forces in Barangay Inaladan, Shariff Saydona Mustapha.

Lt. Colonel Edwin Alburo, the commander of the 57th Infantry Battalion, said the recovered IEDs were already rigged and ready to be used.

“It appears that they are planning to use these IEDs for something somewhere where it will have a big impact,” Alburo said, referring to the festivals in Isulan, Sultan Kudarat and Midsayap in North Cotabato.

Two of the recovered IEDs were placed inside “Jetmatic” water pumps while one was made using a four-liter water gallon, Alburo added.