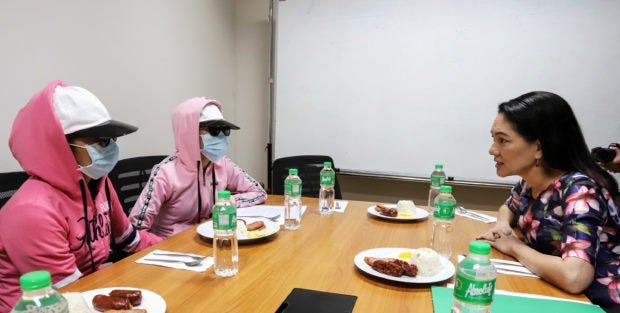 Sen. Risa Hontiveros, chairperson of the Senate Committee on Women, Children, Family Relations and Gender Equality, before Tuesday’s public hearing, 28 January 2020, chats with two Filipina minors rescued from Chinese prostitution dens. Hontiveros is leading an investigation into the proliferation of human trafficking activities in the country brought about by the influx of Philippine Offshore Gaming Operators (POGO). Cesar Tomambo/Senate PRIB

“We have only experienced this kind of activities when Pogo was created, and a lot of Chinese employees in Pogos are the ultimate clients of these prostitution dens,” he said during the Senate hearing on prostitution dens for Pogo workers.

Maj. Gideon Ines Jr., chief of the investigation unit of the police in Makati City, where a number of sex rings were recently busted had the same observation. He explained customers of prostitution dens raided by the police in the previous months are also Chinese nationals.

He also called on management of hotels to report to authorities should they notice suspicious activities in their establishments. In the past, police have also raided sex dens in hotels.

“I am asking the cooperation of the hotel industry para i-report nila sa mga kinauukulan ‘yung mga (to report to authorities) group of women na nagchecheck in sa kanila (who check-in in their hotels) in a long time basis, katulad ng (as in) monthly, yearly, or ‘yung weekly basis,” said Ines.

During the hearing, Sen. Risa Hontiveros, chair of the Senate Committee on Women, Children, Family Relations, and Gender Equality,  revealed that women in these prostitution dens are also being offered through messaging apps.

(There are menu of services as if it is a restaurant. It seems the women are merely being ordered in the app by Chinese members of the chat group. It’s similar to Grabfood where there is a menu and a price, and then it will just arrive at your hotel or condo.)

Hontiveros then urged the NBI and the Philippine National Police to launch a crackdown on prostitution dens related to Pogos.

She said she is also studying the possible suspension of all Pogo operations in the county while reviewing economic implications of the move.

“Kailangan na nating umaksyon (We need to act now). We need to look into suspending Pogo operations because they attract criminals into our country,” said the senator.