BEIJING — China on Sunday ordered a temporary ban on wildlife trading as the country struggles to contain a deadly virus believed to have been spawned in a market that sold wild animals as food.

Raising, transporting or selling all wild animal species is forbidden “from the date of the announcement until the national epidemic situation is over”, said a government directive.

The ban was issued by the Ministry of Agriculture, the State Administration for Market Regulation, and the National Forestry and Grassland Administration. 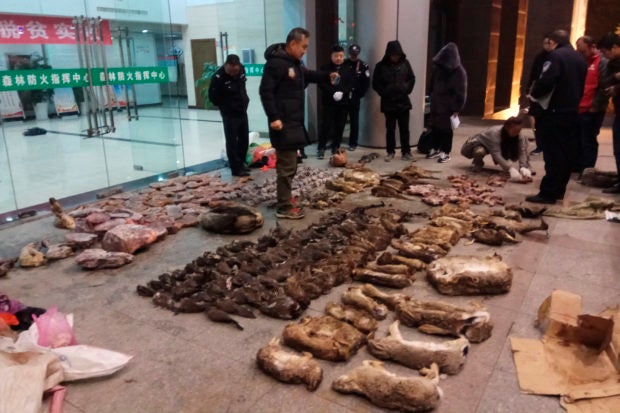 In this Jan. 9, 2020, photo provided by the Anti-Poaching Special Squad, police look at items seized from store suspected of trafficking wildlife in Guangde city in central China’s Anhui Province. The outbreak of a new virus linked to a wildlife market in central China is prompting renewed calls for enforcement of laws against the trade and consumption of exotic species. (Anti-Poaching Special Squad via AP)

The lethal virus, which has caused 56 confirmed deaths and nearly 2,000 total infections in China, and spread to about a dozen countries, is believed to have originated in a market in the central city of Wuhan, where a range of wildlife was reportedly sold.

Conservationists have long accused China of tolerating a shadowy trade in exotic animals for food or as ingredients in traditional medicines, including highly endangered species such as the pangolin or tiger.

Health experts said the trade poses a significant and growing public health risk as potentially dangerous animal-borne pathogens that people would normal not be exposed to make the jump to humans.

Civets, a cat-like creature, were among dozens of species listed on an exhaustive price list for one of the animal-trading businesses at the Wuhan market that emerged online last week.

Sunday’s announcement said all businesses, markets, food, and beverage outlets and e-commerce platforms are “strictly prohibited from trading in wild animals in any form”.

It added that “consumers must fully understand the health risks of eating wild animals, avoid wild game, and eat healthy”.

The so-called bushmeat trade, along with broader human encroachment on wild habitats, is bringing humans into ever-closer contact with animal viruses that can spread rapidly in today’s connected world, scientists said.

A study by the Global Virome Project, a worldwide effort to increase preparedness for pandemics, estimated that there are nearly 1.7 million undiscovered viruses in the animal kingdom, nearly half of which could be harmful to humans.

Peter Daszak, a virology expert with the project, told AFP its research also indicated that we can expect around five new animal-borne pathogens to infect humanity each year.

China has launched previous crackdowns on the wildlife trade, including after SARS, but conservationists say the trade typically resumes over time.