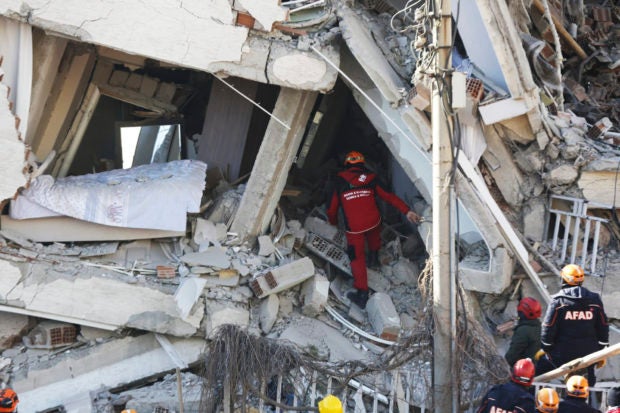 Rescuers work on searching for people buried under the rubble on a collapsed building, after an earthquake struck Elazig, eastern Turkey, Saturday, Jan. 25, 2020. Rescue workers were continuing to search for people buried under the rubble of apartment blocks in Elazig and neighboring Malatya. Mosques, schools, sports halls, and student dormitories were opened for hundreds who left their homes after the quake (IHH/ Humanitarian Relief Foundation via AP)

ANKARA, Turkey — Turkish rescue teams continued to pull survivors from collapsed buildings Sunday, more than a day and a half after a powerful earthquake hit the country’s east, killing at least 31 people, officials said.

The magnitude 6.8 quake injured 1,556 people, and 45 people had been pulled from the rubble so far, the Turkish Disaster and Emergency Management Presidency (AFAD) said.

Rescue teams concentrated their efforts in the Mustafa Pasa neighborhood of the city of Elazig and the nearby town of Sivrice, the closest residential area to the epicenter of Friday night’s quake.

Turkish television showed Ayse Yildiz, 35, and her 2-year-old daughter Yusra being saved from a collapsed apartment building in Mustafa Pasa district. They had been trapped for 28 hours after the earthquake struck.