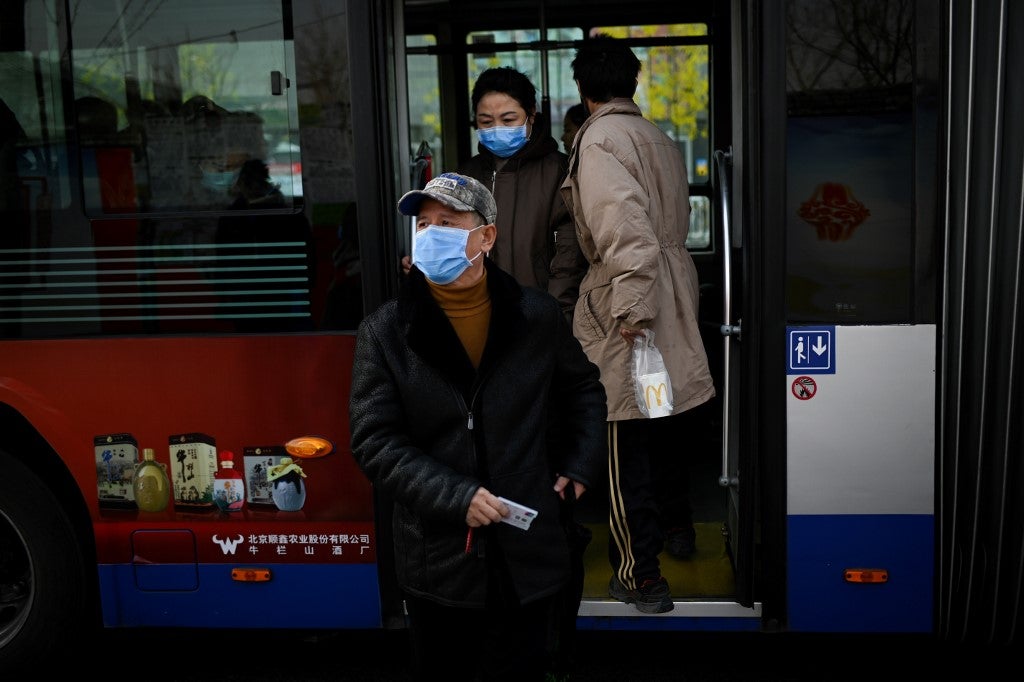 People wearing protective masks get off a bus in Beijing on January 22, 2020. (Photo by WANG Zhao / AFP)

BEIJING, China — One province and three major cities in China will ban long-distance buses, authorities said Sunday, as they scramble to contain a deadly new virus that has spread across the country.

The eastern Shandong province, with a population of 100 million people, will suspend long-distance buses entering its territory, state broadcaster CCTV reported, following the announcement of similar measures in the cities of Tianjin, Beijing and Xi’an.

Inter-city buses in the province will only be allowed to leave if stations have temperature screening measures, CCTV said.

Inter-city taxis will be suspended, except those from the city’s airport, the statement said.

The measures are to stop the spread of the virus through “passenger transport by road and taxis”, officials said.

Several cities and regions across China have announced travel restrictions to control the virus that has infected nearly 2,000 people and killed 56.

The strictest measures have been imposed on Wuhan, the epicentre of the outbreak, where people are not allowed to leave the city.

Transport bans have been placed in many other cities in Hubei province, of which Wuhan is the capital, affecting some 56 million people.

Beijing announced it will suspend bus services entering and exiting the Chinese capital’s boundary from Sunday, and the northern city of Tianjin will suspend long-distance buses and chartered buses that enter and leave the city starting Monday.

But in an about-face, the authorities in the southern city of Shantou reversed an announcement saying they would lock down part of their city.

They said they would “not restrict the access of vehicles” or people into the city after an earlier statement saying they would ban entry into the city of 5.6 million people — a 1,100-kilometer drive south of Wuhan.