MOSCOW – Russian President Vladimir Putin remained tight-lipped about his future role Wednesday as he fast-tracks a set of constitutional changes widely seen as an attempt to maintain his dominance over the nation’s political scene after his current term ends in 2024. 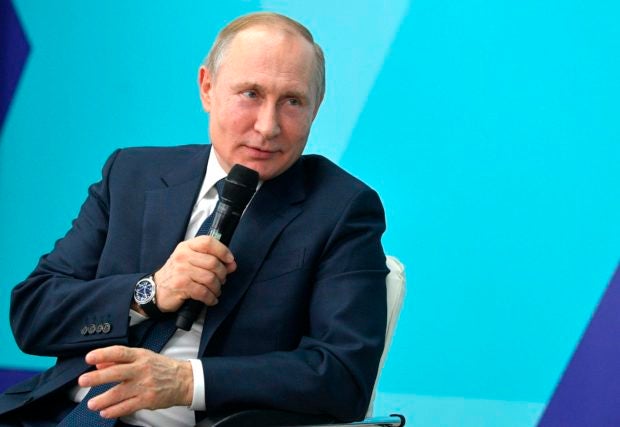 Russian President Vladimir Putin speaks while visiting the “Sirius” Educational Centre in the Black Sea resort of Sochi, Russia, Wednesday, Jan. 22, 2020.Putin commented on his proposals to increase state support for families with children made in a state of the nation address last week. (Mikhail Klimentyev, Sputnik, Kremlin Pool Photo via AP)

Asked at a meeting with students if Russia could follow the example of Kazakhstan, where a longtime president stepped down last year but continued calling the shots by assuming another prominent position, Putin shrugged off the idea as unfit for Russia.

“The emergence of a position above the presidency would mean a dual power, which is absolutely unacceptable for a country like Russia,” Putin said. “It would erode the presidency.”

The 79-year-old Nursultan Nazarbayev, who had ruled Kazakhstan since the Soviet times, resigned as president last year and had a protege elected to the post, but he retained his grip on power by securing a prominent position as head of the nation’s security council.

Last week, Putin proposed a slew of constitutional amendments that would reshape the nation’s government system and potentially allow him to carve out a new role when he wraps up his current six-year term.

Putin, 67, has been in power for more than 20 years, longer than any other Russian or Soviet leader since Josef Stalin, who led from 1924 until his death in 1953.

The Kremlin-controlled Russian parliament is set to approve the changes in the first of three required readings.

Putin has argued that the constitutional amendments are intended to strengthen democracy, but Kremlin foes have charged that they are aimed at allowing him lifelong rule.

Among other things, Putin suggested that the constitution must specify the authority of the State Council, an advisory body that consists of regional governors and top federal officials. The Kremlin’s constitutional bill submitted to parliament empowers the council to “determine the main directions of home and foreign policy,” its specific authority to be spelled out in a separate law.

Some observers alleged that Putin may continue calling the shots as the Council’s head after his current presidential term expires.

Putin’s proposals initially led some observers to speculate that he also may move into the post of prime minister — something he already did once when he stepped down after two terms in 2008 and let his protege, Dmitry Medvedev, serve as placeholder president for four years before reclaiming the job.

Immediately after announcing the proposed changes last week, Putin fired Medvedev, who had the job for eight years, and named tax chief Mikhail Mishustin to succeed him.

The proposed amendments strengthen the presidency, making it highly unlikely that Putin would again opt for the much weaker position of prime minister.

While the amendments would give lawmakers the power to appoint Cabinet ministers, a role that currently belongs to the presidency, the president retains the right to name and dismiss the prime minister and fire Cabinet members.

Putin reaffirmed Wednesday that Russia must maintain a strong presidency.

“With its vast territory, numerous confessions and a multitude of peoples and ethnic groups, Russia needs a strong presidential power,” he said when asked if Russia could switch to the parliamentary system.

“We have so many nationalities and ethnic groups with different ways of life, and it’s practically impossible to integrate all of that under a parliamentary republic,” he added. “Our country should undoubtedly be a presidential republic.”