VANCOUVER, British Columbia  – A Canadian justice department lawyer said Wednesday that fraud, not sanctions, is the crucial element for a judge to consider when deciding if a senior executive of Chinese tech giant Huawei should be extradited to the United States. 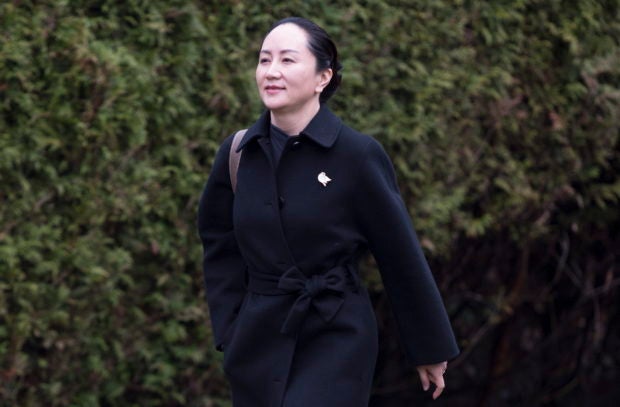 Meng Wanzhou, chief financial officer of Huawei, leaves her home to go to B.C. Supreme Court in Vancouver, Wednesday, January 22, 2020. Wanzhou is in court for hearings over an American request to extradite the executive of the Chinese telecom giant Huawei on fraud charges. (Jonathan Hayward/The Canadian Press via AP)

Washington accuses Huawei of using a Hong Kong shell company to sell equipment to Iran in violation of U.S. sanctions. It says Meng, 47, committed fraud by misleading the HSBC bank about the company’s business dealings in Iran.

“Lying to a bank in order to get banking services that creates a risk of economic prejudice is fraud,” Canadian Department of Justice lawyer Robert Frater told Justice Heather Holmes. “Your job is to determine if there is evidence before you capable of amounting to some evidence of fraud.”

Canada arrested Huawei’s chief financial officer and the daughter of its founder in December 2018 in Vancouver as she was changing flights at America’s request.

Beijing views Meng’s case as an attempt to contain China’s rise. Huawei represents China’s progress in becoming a technological power and has been a subject of U.S. security concerns for years.

Her lawyers say even if Meng made false statements to HSBC, the bank would not have faced any risk in Canada due to the absence of sanctions.

But Frater argued among other things, Meng’s misrepresentations put HSBC reputation at risk for dealing with Iran.

“Businesses worry about their reputation because a bad reputation can lead to economic loss,” he said.

He said the U.S. sanctions were the reason for the meeting with the bank, but it was the alleged misrepresentation that matters to the United States.

Meng, who is free on bail and living in one of the two Vancouver mansions she owns, sat next to the court interpreter. She listened to the proceedings with her head down studying documents.

Meng denies the U.S. allegations. The U.S. Department of Justice has stressed that Meng’s case is separate from the wider China-U.S. trade dispute.

The first phase of the extradition hearing is expected to last through the end of the day on Thursday.

The second phase, scheduled for June, will consider defense allegations that Canada Border Services, the Royal Canadian Mounted Police and the FBI violated Meng’s rights while collecting evidence before she was actually arrested.