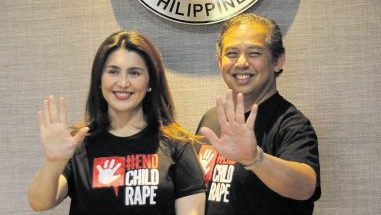 MANILA, Philippines — In most countries, having sex with a 12-year-old child would have qualified as statutory rape. Not so in the Philippines, where 12 is considered the age of sexual consent, the lowest in Southeast Asia.

That might soon change, with the passage of a bill that seeks to raise the age of sexual consent in the Philippines from 12 to 16.

House Bill No. 4160 authors Majority Leader Martin Romualdez and his wife, Yedda Marie, chair of the House children’s welfare committee, said Congress must do more to protect children from predators who take advantage of infirmities in the law.

“The establishment of a minimum age of sexual consent is a critical component in shielding children from sexual violence,” the Romualdezes said in an explanatory note to the bill, which proposes amendments to the Revised Penal Code, as amended by the Anti-Rape Law of 1997, and the Special Protection of Children against Abuse, Exploitation and Discrimination Act.

“Children below such age are without the power to resist and to give their genuine and fully informed consent to any sexual activity,” the couple added.

In a statement, Tingog Sinirangan Rep. Yedda Marie lamented that the current age of sexual consent was “too low.”

“Those 12-year-olds [have] barely gone through puberty but the law assumes that they are old enough to give sexual consent. This is why rapists can easily get away with their crimes. We must put a stop to this,” she said.

HB 4160 also amends the wording in current laws to reflect the reality that men and boys may also fall victim to rape or sexual abuse.

“When a boy is raped, the law sees it only as sexual assault,” Romualdez said, adding that boys and girls must have equal protection under the law.

As it is, sexual abuse against boys “has a much lesser penalty,” he said.

“This is unfair especially when data suggests that boys are more vulnerable than girls in school, the community and in the workplace. There must be equality,” Romualdez added.

A 2016 National Baseline Study on Violence Against Children in the Philippines by the Council for the Welfare of Children and Unicef showed that severe sexual violence against boys at 4.1 percent was significantly higher than that among girls, at 2.3 percent.

The Romualdez couple agreed that the delivery of justice and care for victims of sexual abuse in the Philippines should be improved, and increasing the age of sexual consent to establish statutory rape would be a big step in the right direction.

“We call on our fellow parents in Congress to stand with us in pushing reforms that protect our children. We must protect the most vulnerable. We must end child rape now,” Yedda Marie said.