Oldest image of Venice discovered dating back to 14th century 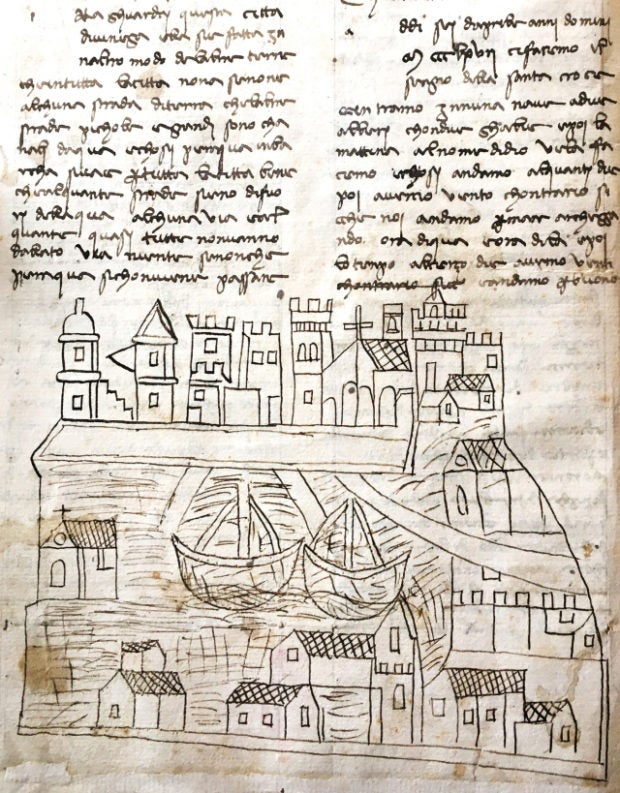 The oldest known image of Venice dates back to the 14th century. Image: Ministry of Cultural Activities of Heritage and Tourism/AFP

A Renaissance historian has unearthed the oldest known image of Venice dating from the 14th century, showing how even then the city of canals gripped the imagination of visitors.

Sandra Toffolo, a researcher at the University of Saint Andrews in Scotland, found the sketch in a manuscript describing Italian pilgrim Niccolo da Poggibonsi’s 1346-1350 voyage to Jerusalem which took him through the bustling port city.

“The discovery of this view of the city is of great importance for our understanding of images of Venice, because it shows that even from very early on, the city held great fascination for contemporaries,” Toffolo said in a statement published by Saint Andrews earlier this month.

The drawing in pen, while quite rudimentary and lacking the linear perspective which was only to be adopted in the following century during the Renaissance, shows what appears to be a crowded city with churches, palaces with parapets, canals and even gondolas.

Besides the Holy Land, da Poggibonsi’s travels also took him to Damascus in Syria and Cairo and Alexandria in Egypt.

The manuscript was likely written shortly after his return to Italy in 1350.

A specialist in Venetian Renaissance history, Toffolo discovered the image in a library in Florence in May while working on a detailed study of Venice, due to be published this year.

Throughout history, the city-state has fascinated visitors, not only for its watery mazes of islands, lagoons and canals, but for its unique architecture and international flair.

At its height during the Middle Ages and Renaissance, Venice was a powerful maritime and financial center, and the city has inspired more contemporary artists and writers including Thomas Mann, Marcel Proust and Ernest Hemingway.

Only maps and nautical charts indicating the city of Venice predate the newly discovered sketch.

The oldest such map was made in about 1130 by Friar Paolino, a Franciscan monk from Venice, according to Saint Andrews.

Toffolo found that the original manuscript image contained small pinpricks, suggesting that it had been subsequently copied.

A common copying technique at the time was to sift powder through the holes onto a new surface, thus transferring the image to a new piece of paper.

Toffolo subsequently found other images in later manuscripts and books that were “clearly based on the image in the manuscript in Florence”.

Renaissance art historian Kathryn Blair Moore has written that da Poggibonsi’s manuscript would have been an early example of a new genre of writing, a “pilgrimage guidebook”. NVG